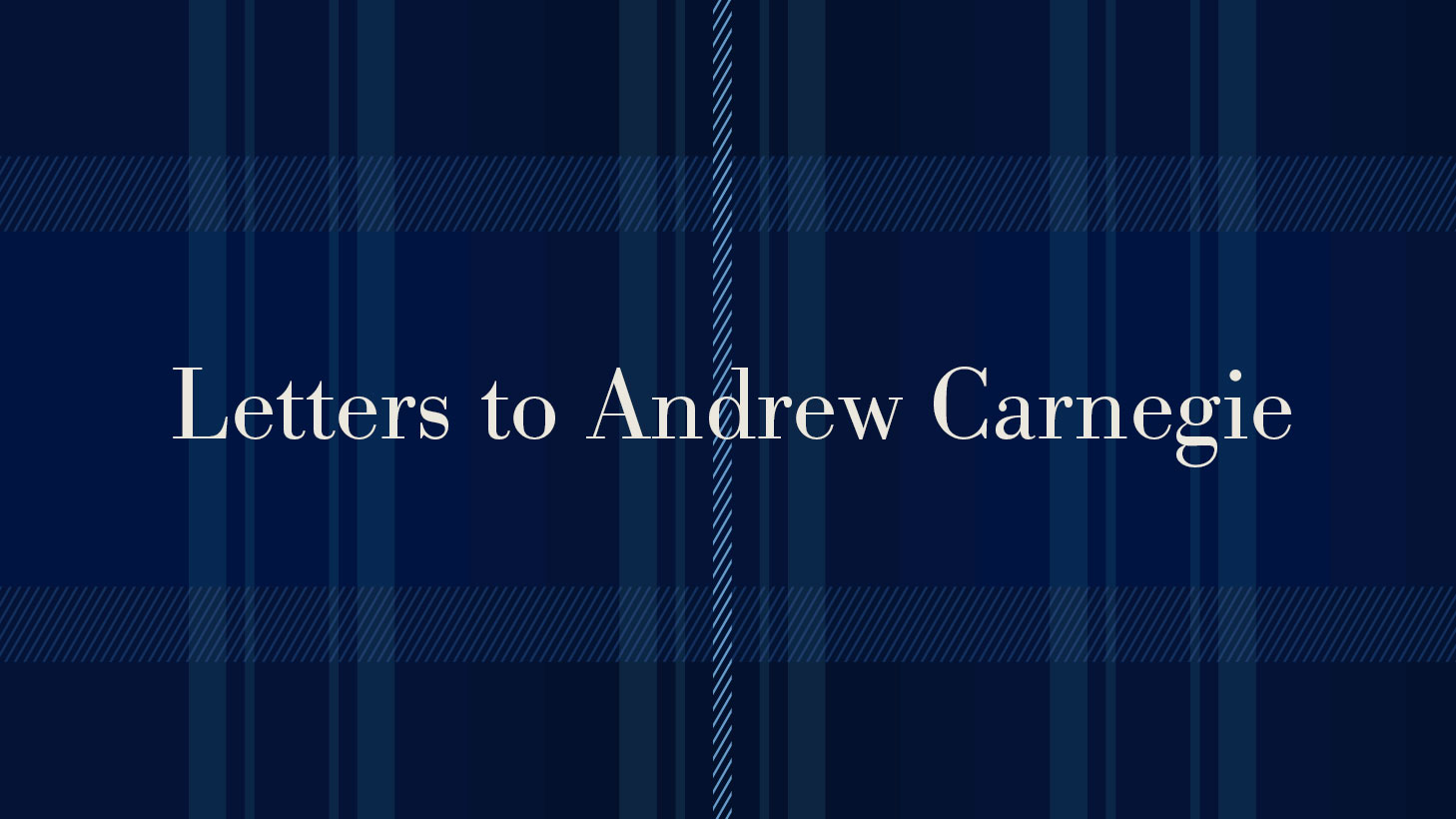 A CENTURY OF PURPOSE, PROGRESS, AND HOPE

In 1935, Carnegie Corporation of New York published the Andrew Carnegie Centenary, a compilation of speeches given by the leaders of Carnegie institutions, family, and close associates on the occasion of the 100th anniversary of Andrew Carnegie’s birth.

Among the many notable contributors in that first volume were Mrs. Louise Carnegie; Nicholas Murray Butler, president of both the Carnegie Endowment for International Peace and Columbia University; and Walter Damrosch, the conductor of the New York Symphony Orchestra whose vision inspired the building of Carnegie Hall. The Andrew Carnegie Centenary not only memorialized Mr. Carnegie, but also highlighted the accomplishments of the many organizations he had left in private hands to be administered for the public good.

One of the book’s most affecting passages belongs to Henry James, president of the Teachers Insurance and Annuity Association (TIAA), an organization Mr. Carnegie helped establish to support educators in their retirement. “We, who in one capacity or another are serving institutions that Mr. Carnegie founded, know well how far in space and in time this one man’s shadow is cast,” Mr. James stated. “And we know, too, how often we turn back to him in our thoughts and then find faith and hope as we lay the forward course by reference to his directions.” Like all Andrew Carnegie’s endeavors — from libraries to peacebuilding organizations — TIAA was established to fill what he saw as a critical societal need.

Andrew Carnegie died on August 11, 1919. To mark this centennial, the leadership of the institutions he founded offer this collection of letters as a tribute to the continuing impact of his philanthropy. Like the earlier volume, this new book is meant as a reflection on a century of effort to achieve Andrew Carnegie’s enduring vision. It also constitutes a rededication by the Carnegie family of institutions to their singular mission to achieve “real and permanent good in the world” as they strive to “lay the forward course” into the future.

When my colleagues at Carnegie Corporation of New York asked me to write this introduction, I at first expressed my reservations to Vartan Gregorian, given there were others who, in my opinion, possess greater knowledge of Andrew Carnegie and the myriad disciplines his institutions promote. He countered, however, that I have been both a witness and a participant in upholding Andrew Carnegie’s great legacy, and this book would give me the opportunity to formally show my deep and enduring respect and appreciation for the work of our sister institutions.

For the past 25 years, I have been privileged to work at one of Andrew Carnegie’s legacy foundations, Carnegie Corporation of New York, and I have witnessed some of the greatest achievements not only of Carnegie Corporation, but of all the institutions founded by Andrew Carnegie. If he were alive today and could see all that his fortune and goodwill have accomplished, I know he would be pleased. Of course his work is not yet finished. Now, 100 years after his death on August 11, 1919, the leadership of the Carnegie institutions who honor and carry on his legacy, and Mr. Carnegie’s great-grandson, William Thomson, have written letters to Andrew Carnegie recording their collective achievements, future aspirations, and even some failures, in this singular publication, Letters to Andrew Carnegie.

Truth be told, I did not know much about Andrew Carnegie upon starting my job at Carnegie Corporation, but I quickly became an avid student of this great man. The more I read about him, the more I became fascinated with his philanthropic endeavors. In 1901, Andrew Carnegie sold his steel empire to J.P. Morgan for $480 million (over $14 billion in today’s dollars), making Mr. Carnegie the richest man in the world. He had spent down most of his fortune by 1911, and endowed Carnegie Corporation of New York in perpetuity with the remaining $135 million. In 1915, at the age of 80, when asked to state his business — by then fully embracing his new profession as a philanthropist — Carnegie declared: “My business is to do as much good in the world as I can.” By the time he died in 1919, he had built more than 2,500 libraries; supported scholarships; and donated to science and research projects, hospitals, concert halls, and museums. He built public bathhouses and parks, and donated more than 7,500 church organs in all. Few projects bear his name, but Andrew Carnegie did establish over 20 Carnegie organizations that today carry out their collective missions of promoting democracy, peace, education, and science, while honoring heroic deeds at the highest, most selfless level.

One story about his giving that Andrew Carnegie happily told many times was the purchase of Pittencrieff Park, a sprawling estate in his hometown of Dunfermline, Scotland, owned by the Hunt family. This was the same Hunt family who had, decades before, banned Thomas Morrison, Sr., Andrew Carnegie’s maternal grandfather, and his entire family from ever entering the property. The reason: Mr. Morrison had successfully sued the Hunt family for refusing to grant access to the historical sites in the park. As a result, for one day a year, the park was opened to all members of the public except the Morrisons, the family of the man who had made it possible. A reversal of fortunes forced the Hunts to put the estate up for sale. Andrew Carnegie, by then a very rich man who remembered the decades of petty injustice against his family, bought the entire property and donated it to the people of Dunfermline. Recalling the donation in his autobiography, Mr. Carnegie wrote, “Pittencrieff Glen is the most soul-satisfying public gift I ever made, or ever can make. … This is the crowning mercy of my career! I set it apart from all my other public gifts.” To show their gratitude toward its most famous son, the townspeople of Dunfermline later erected a large statue of Andrew Carnegie at the center of the park. Today there is a path leading to the statue that, in 2013, was named “Vartan’s Way” in honor of Vartan Gregorian, a leading steward of Andrew Carnegie’s philanthropic legacy.

All of these institutions are beneficiaries of Andrew Carnegie’s generosity and his largesse, and we stand united, at this centennial moment, in remembering our founder and in saluting each other as we all rededicate ourselves to carrying out the missions, both disparate and intertwined, for which he endowed us.

A number of significant dates in Andrew Carnegie’s life have inspired leaders of the organizations he founded to embark on special projects in his memory. Toward the close of the twentieth century, Carnegie Corporation and its sister institutions planned to mark December 10, 2001, the centennial of the day Andrew Carnegie committed himself to philanthropy, with a major celebration. No one could have foreseen the tragedy that would befall our nation, and indeed the world, three months earlier, on September 11, 2001. In the wake of the attacks, the trustees of the Carnegie organizations debated postponing the event. Ultimately, they decided to carry out their plan and “greet the twenty-
first century with optimism and determination.”

Thus, on December 10, 2001, a new century for the Carnegie institutions had begun.

The Centennial was marked with two resolutions. In the first to be ratified, the institutions jointly rededicated themselves to their founder’s missions:

All of these institutions are beneficiaries of Andrew Carnegie’s generosity and his largesse, and we stand united, at this centennial moment, in remembering our founder and in saluting each other as we all rededicate ourselves to carrying out the missions, both disparate and intertwined, for which he endowed us. We are the many branches of the tree that sprang forth from the roots of his extraordinary foresight and philanthropy. In our missions and our undertakings we embody the great work of improving the lot of humanity through science, education, culture, research and philanthropy; through the quest for peace and the preservation of historical places; and through the recognition of ordinary people who do extraordinary things. In this way … the Carnegie organizations assembled here have contributed to the advancement of modern civilization and to thwarting the forces of suffering and ignorance.

In the second resolution, they created the Andrew Carnegie Medal of Philanthropy to be awarded:

… to an individual or individuals embodying our founder’s vision of assuring that private wealth serves the public good. … As the family of institutions who carries on Andrew Carnegie’s legacy, we believe these awards will stand as testimony, before the international community, to the power of one person to make a difference and to the enduring belief that individual freedoms can assure great men and women and great societies.

Closing the meeting that day, Governor Thomas H. Kean, chairman of Carnegie Corporation of New York’s Board of Trustees, who presided over the gathering, declared, “We are not marking an ending, but proclaiming a new beginning for all of us.”

Now, 100 years after Andrew Carnegie’s death, Vartan Gregorian, the president of Carnegie Corporation, envisioned Letters to Andrew Carnegie as a way to commemorate the centennial of this event. This volume, comprising letters to Mr. Carnegie from the heads of the institutions he founded, shares reflections on his lasting influence on each organization. Upholding his philanthropic vision, these institutions continue to research, explore, invent, discover, and disseminate ideas and to instill knowledge and promote peace and democracy, thus improving the lives, security, health, and freedom of people around the world. The letters in this book serve as a testament not only to Carnegie’s philanthropic legacy, but also to the partnerships and friendships cultivated among the Carnegie institutions, and to the continuing role each plays in realizing Andrew Carnegie’s vision for the future. Our deepest thanks to Joel Rosenthal for sparking the idea for this book when he shared with us a collection of speeches honoring Andrew Carnegie on the centennial of his birth. Thanks, too, to Vartan Gregorian for leading the effort to create this book, for strengthening the bonds between the Carnegie institutions, and for creating opportunities to connect with Andrew Carnegie’s descendants. And sincere thanks to William Thomson, Andrew Carnegie’s great-grandson, for his very special contribution to this book.

I conclude with a quote from Mr. Carnegie’s “The Gospel of Wealth,” in a way his own “Letter to Andrew Carnegie,” which still serves as a foundational document and continues to inspire philanthropists around the world: “… the man who dies leaving behind him millions of available wealth, which was free for him to administer during life, will pass away ‘unwept, unhonored, and unsung,’ no matter to what uses he leaves the dross which he cannot take with him. Of such as these the public verdict will then be: ‘The man who dies thus rich dies disgraced.’” Mr. Carnegie, you have indeed accomplished the business of doing much good in the world. Your legacy lives on.

Chief of Staff, Office of the President

In Letters to Andrew Carnegie, members of the Carnegie family of institutions reflect on the character and intentions of our founder, and examine how a century of our collective effort measures up to his aspirations. Reading these letters makes clear what a transformational visionary Andrew Carnegie was, and how lasting is his influence. This collection would have been impossible without the valuable contributions of our colleagues, and we acknowledge and thank them all.