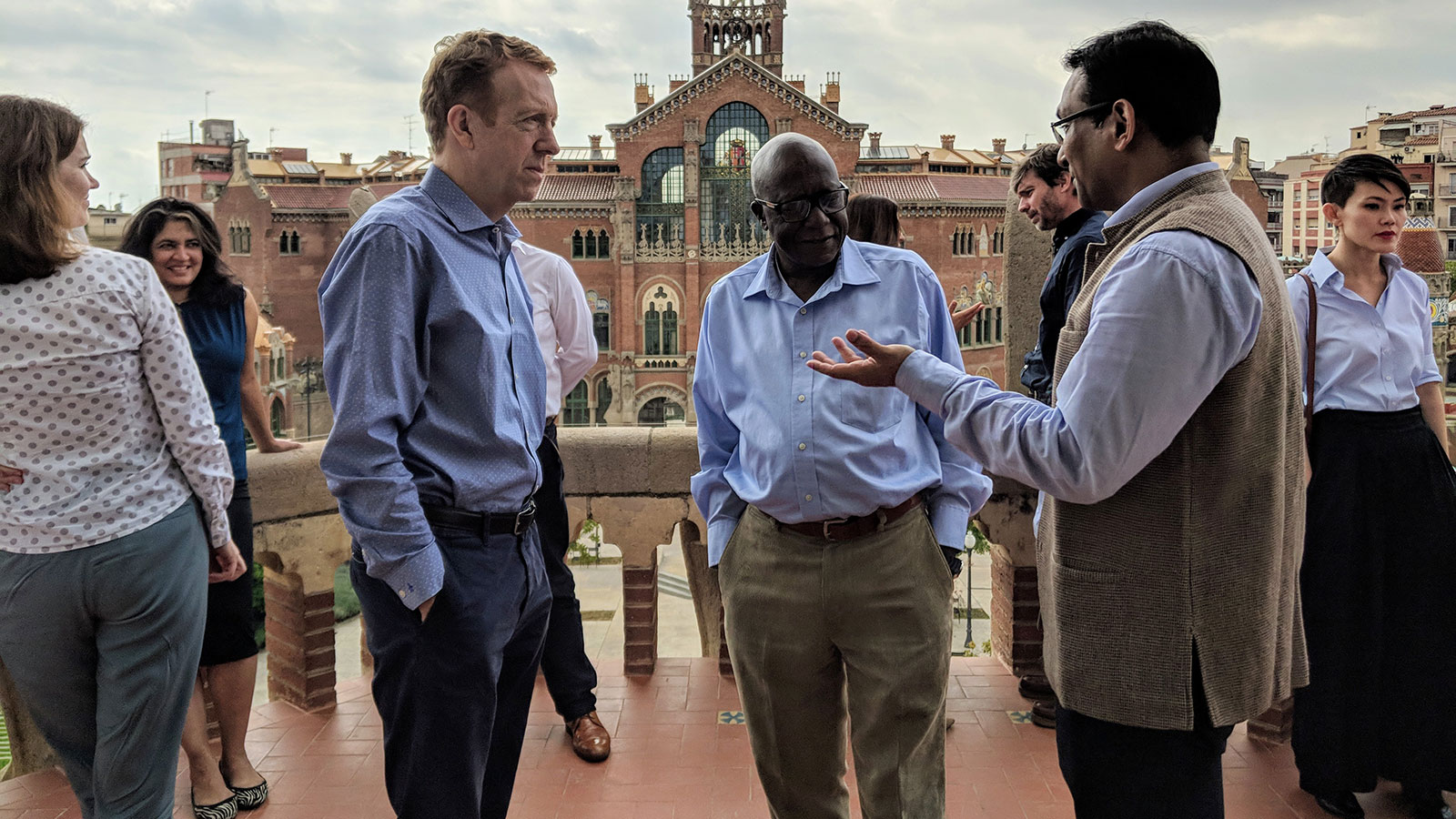 When you established the Carnegie Endowment for International Peace, you charged its board with the constant renewal of the Endowment’s mission. As you wrote, “Lines of future action cannot be wisely laid down … let my Trustees therefore ask themselves from time to time, from age to age, how they can best help man in his glorious ascent onward and upward.”

You founded the Endowment at a critical historical juncture. In many corners, optimism about the world’s interconnected future was reaching a crescendo — just as the foundations of international order that prevailed in the nineteenth century were beginning to crack. Hopes for a more peaceful world seemed close to realization — yet catastrophic war and disorder loomed. The last great surge of the Industrial Revolution was transforming the global economy, bringing with it a host of opportunities and challenges. It was against this backdrop that you challenged the Endowment to promote new actions and ideas that could bend trendlines in a more peaceful direction.

Today we find ourselves at another transformational moment — a moment again defined by cataclysmic threats and unimaginable opportunities. The past century has seen unspeakable horrors, as well as extraordinary progress for peace and the welfare of humankind. But the optimism that overflowed after the end of the Cold War is rapidly giving way to foreboding currents: the return of great power competition; a new technological revolution that is upending how we live, work, and fight; a shift in the world’s economic and military center of gravity, from West to East; and growing tensions between open and closed societies, with nationalism and authoritarianism resurgent.

Walls are going up faster than they are coming down. Democracy’s march has slowed, and even reversed, and the prospect of international law and cooperation is withering on the vine. The tailwinds of globalization — those same forces that you saw shrinking our world into “a neighborhood in constant and instantaneous communication” more than a century ago — have transformed into powerful headwinds, and trendlines once again seem headed towards massively destabilizing collisions.

Like the international system itself, the marketplace of ideas is more diffuse, crowded, competitive, and contested than ever before. Decisionmakers were once starved for information, but today they are drowning in it. Where there was once a small number of trusted brokers of insight and analysis, today’s policy actors now have to navigate a cacophony of voices across countless platforms, with greater skepticism than ever about their reliability, credibility, and independence. Today’s policy discourse is more polarized and divisive, and civil society is under growing suspicion and scrutiny.

That is precisely why now is the time to answer your charge anew. The Endowment has changed a great deal over the past century. Today we are a global institution, with more than 140 scholars spread across 20 countries and six global centers in Beirut, Beijing, Brussels, Moscow, New Delhi, and Washington, D.C. We aim to do more work on and in Africa and Latin America in the years ahead. But even as we adapt to new realities, we nevertheless hold steadfast to our core values: global reach and perspective at a time of heightened insularity; unassailable independence at a time of hyperpolarization; and disciplined, strategic focus on the most consequential issues facing our world at a time when punditry is drowning out serious public discourse.

We continue to believe, as you did, that we have “no party where Peace is concerned.” We represent no national, political, or private interest, nor do we promote an institutional policy agenda. We simply believe that the essential prerequisites to understanding the drivers shaping a changing world — let alone addressing the challenges they pose — are rigorous analysis and innovative solutions informed by ground-truths, enriched by diverse regional and ideological perspectives, and directed smartly to key decisionmakers and the public square.

To rise to the challenge before us, we’ve continued to evolve and adapt, focusing on the most significant forces shaping the emerging order, and concentrating our efforts where our global platform has the most to offer.

With on-the-ground expertise in key regions, we provide sophisticated analyses of the societal, economic, security, and political forces fueling competition and conflict, bringing our global network together to find pathways to conflict mitigation and resolution. We publish in multiple languages and engage with a variety of players who have a stake in outcomes, as well as the ability to shape them. Ours is a world in which governments remain essential to questions of war and peace, but their monopoly on power, access, and influence is not what it once was. That makes the work of peace ever more complex, even as
it allows more of our fellow citizens to contribute to its achievement.

With a mix of world-class economists and strategists, we are helping executives from situation rooms to boardrooms rethink the critical intersection of economics and national security — ensuring that our international relations contribute to the renewal of our own societies. I remain convinced that while foreign policy begins at home, it must end there, too — in better jobs, more security, and a cleaner climate. In the United States, that does not mean casting aside the enlightened self-interest that has defined American leadership at its best, but it does mean we need to think more imaginatively and do a better job bridging the disconnect between card-carrying members of the Washington establishment and American citizens.

Together with governments and other organizations around the globe, we are working to strengthen and sharpen the ways in which outside actors can more effectively support civil societies and democracies that are under unprecedented strain. In too many places, the compacts between state and society are far too brittle, and ideas on how to enliven them are far too stale. The challenge is only becoming more urgent, as authoritarian regimes increasingly feel the wind in their sails.

And, finally, we are working to help the development of international norms and rules of the road catch up to the pace of technological innovation — seeking to maximize the promise of new technologies while minimizing their disruptions. You would be amazed at the technological progress we’ve made in the instruments of both peace and war. Since the advent of the nuclear age, we’ve mostly managed to keep the genie in the bottle, but that task is going to be far more challenging in the digital age, making the Endowment’s work that much more important.

It is the awesome responsibility of this Endowment, and all those charged with executing its mission, to meet this moment with the energy, wisdom, and determination that it demands. And it is our hope that your legacy will continue to inspire other philanthropists for peace. We need them more than ever.