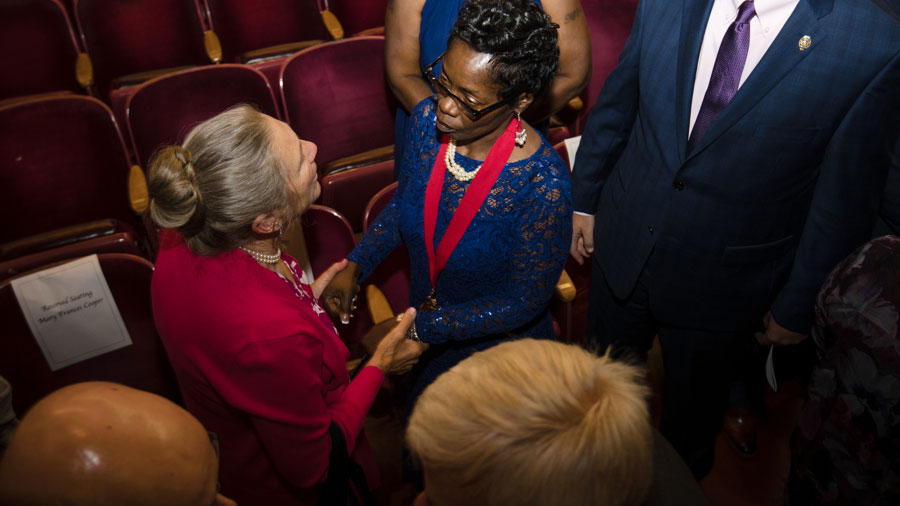 It is with great pride that I write you on this 115th anniversary of the first meeting of the Hero Fund Commission. I am pleased to report that this most venerable institution, which you considered your own child, created to serve and celebrate the better angels of mankind, has endured and thrived. You once referred to the Hero Fund as the “noblest fund in the world.” After giving more than 10,000 Carnegie Medals for heroism, and nearly $41 million in support for heroes and dependents, our work to honor the true heroes of our society goes on, having proven time and again the noble truths of your insights and the enduring value of your gift.

Beyond the medals and the support that you demanded for heroes and kin so that they “not suffer,” the work of the Hero Fund has unraveled the mysteries of the acts and actors impacting our society, as well as the hearts of those who have struggled, overcome, and endured by elevating the value of another’s life beyond their own. We have seen that, in all cases, as you seemed to fully understand over a hundred years ago, the hope that has come to those in peril, in the faces of strangers and friends, has been as the presence of angels. Whether lives were saved, or lost, or changed, the hero has imparted hope to the hopeless. Heroes can be considered saviors in a sense for all of us who have witnessed what they did for others, often for strangers. This you recognized early on in the person of “young Hunter” of Dunfermline, and in those who braved the fire and smoke of the Harwick mine. It still exists today in the hearts and minds of the rescuers and victims who have locked eyes in fearsome, and often final, moments.

After giving more than 10,000 Carnegie Medals for heroism, and nearly $41 million in support for heroes and dependents, our work to honor the true heroes of our society goes on, having proven time and again the noble truths of your insights and the enduring value of your gift.

Every one of the Carnegie heroes the fund has recognized personifies that invaluable, God-given trait that you cherished most, and we cherish still: simply that they loved another enough to risk, and in many cases sacrifice, their own lives to try to save them. As purveyors of selflessness, hope, and equality, they represent the possibility for a more peaceful world if, as an ideal, their actions are taken into the hearts of the many, who then do likewise by putting others first.

The fund has provided much-needed support for disabled heroes and for those from whom heroes were taken away, many times far too soon, as a result of their selflessness. As you had hoped, there have been many “exceptional children” for whom the fund has made “exceptional education” a reality. It has soothed the wounds these heroes bear, both visible and unseen. And in all it has done, the fund continues to herald the selfless acts of the heroes among us, for our time and for future generations.

You once said that “the whole idea” of your Hero Fund was contained in the poem “In the Time of Peace” by your good friend Richard Watson Gilder. Its beautiful words ring as true now as they did more than a century ago:
A civic hero, in the calm realm of laws,
Did that which suddenly drew a world’s applause;
And one to the pest his lithe young body gave
That he a thousand thousand lives might save.

We rejoice in all of the good that you have done these many years through your gift of the Hero Fund Commission and those hero funds that followed and still thrive. As we look forward to the future heroes yet to join the rolls of honor, we can only offer thanks and hope that your words to the fund’s first president in 1905 yet ring true: “You have made a start, and there is to be no finish. It goes on forever.” And if it takes forever to find the one millionth “civic hero” and reach the time of peace you dreamed of, I hope and expect that the fund will press on until he or she is found and recognized. For as you knew and taught us, peace will start in the heart of someone who decides to gift it to another in desperate need of it, then build as the many spread it to the world, equally desperate, one heart at a time.

This is my pledge, on behalf of the devoted staff and board of the Hero Fund Commission, who are proud to continue this great work in your name. What you have done has indeed drawn, as Gilder noted, the “world’s applause” for those you called “true heroes of civilization.”