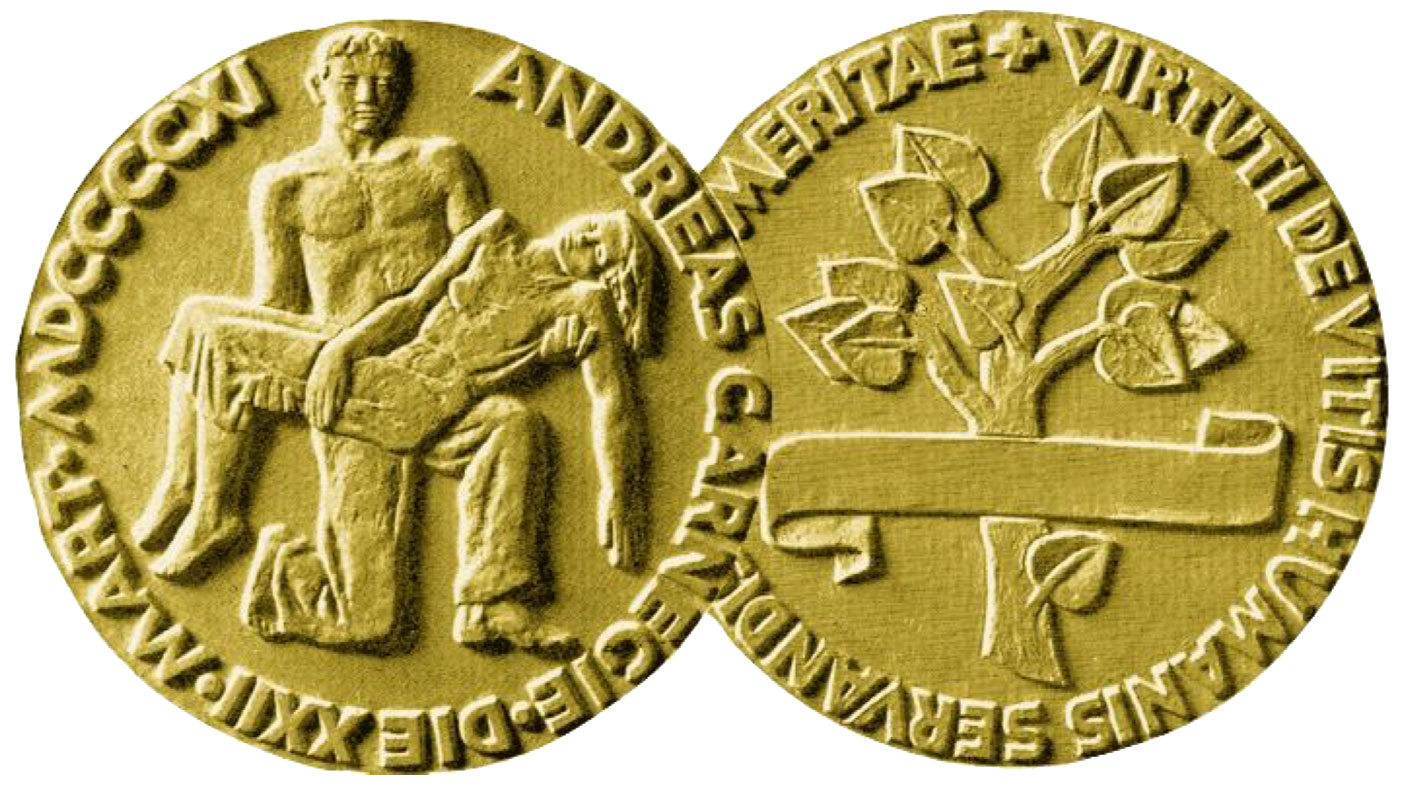 Inspired by a mining accident in Pittsburgh, 1904, in which a miner and an engineer, in spite of great danger, attempted to save the lives of numerous buried people before making the ultimate sacrifice themselves, you founded your first Hero Fund in the United States to give recognition to lifesavers. These events seem to have made such an impression on you and Mrs. Carnegie that you set up similar lifesaver foundations in the UK and Europe in the following years.

Thanks to your initiative and your generosity, the Swiss Federal Council established a foundation in Switzerland in 1912. Its purpose, as you wrote in your Deed of Trust, is to “place people who, whilst pursing peaceful endeavours, have injured themselves during a heroic effort to save human life, in a somewhat better financial situation than before, and to continue such support until they are fit to work again. In the case of death, provision will be made for the widow and any children; specifically, for the widow until her remarriage, and for any children until they reach working age.”

Since the foundation’s inception, 8,577 lifesavers have been recognised in Switzerland, and over 3.2 million Swiss francs have been paid out by way of pensions and one-time financial contributions.

Much has changed over the course of time, and you will no doubt be interested to know what important developments have eventuated in Switzerland since your foundation was established, and whether the foundation you initiated is still able to meet its objectives.

An important step in the development of our country was the introduction, in 1948, of old-age and survivors’ insurance, in effect Switzerland’s state-run pension system, and, in 1960, a disability insurance program. These programs have improved the financial circumstances of heroes who were injured during rescues, as well as the dependents of those who died during rescues. In addition to this government support, emerging private and occupational accident insurance as well as non-occupational accident insurance have led to a gradual reduction in the number of pension payments by the foundation.

Rescue services have also undergone changes over the last 100 years. Whilst rescues in the past were carried out predominantly by people on the scene and a limited number of professional helpers, the number of trained rescuers has increased enormously today. This change has not only taken place across professional rescue organisations for land, sea, and air-based rescues, but also across the voluntary rescuer sector. The Scout, Samaritan, and other organisations that emerged during your time and in the wake of the First World War and the Spanish flu pandemic not only spread first-aid knowledge widely among the population, but also led to the establishment of an extensive network of potential rescuers.

A lot has also changed in the rationale for rescues. Today’s training sessions and courses for first responders stress that rescuers should not endanger their own lives during a lifesaving operation, but must take appropriate precautions during the rescue process. In line with this, the ways in which rescues are carried out have changed over the years.

Mr. Carnegie, you will probably be asking yourself whether the number of awards is also decreasing proportionately, and whether your foundation is gradually losing its raison d’être. To give you an answer to this question, I would like to briefly mention a case where an award was conferred by your Swiss foundation.

The scene: Zurich-Stadelhofen railway station, Tuesday afternoon, 16 December, 2014. Senat Iseni hears security guards yelling and notices that they are running after a drunken man. Suddenly, the man enters the platform and stumbles — just as a train approaches. Responding instantly, Senat Iseni jumps down onto the track and, with all his strength, pulls the drunken man back onto the platform again. Witnesses later told the rescuer that he himself had only been able to pull his foot clear of the train at the last second. It was something he was not aware of; he only acted.

Despite these inhibiting factors, we are, fortunately, continuing to experience people’s selfless acts directed at rescuing others. This requires bravery and civil courage. The recognition of such acts serves us and our descendants as a model for a humane society.

This case illustrates vividly that a lifesaver does not always have the necessary time to consider whether saving a fellow human being could cost his or her own life. In a split second, a rescuer may have to make a life-changing decision: rendering help may endanger one’s own life, but if no help is given another person may die.

Although, in retrospect, many people would know how to respond, it has to be said that only a few act courageously and decisively. Many people who would have been able to help intentionally look the other way. Even worse, they might watch the accident spellbound and even hinder the helpers in their work.

Are there any reasons for this? Was such behaviour also common in your day? Is it perhaps a fear of doing something wrong that prevents many people from intervening? Today, this is what we know and learn in first-aid courses: the worst thing one can do after someone has been injured is to do nothing. Perhaps potential rescuers’ fear of being made liable for any mistreatments, or prosecuted for substantial damage claims, plays a role in this reticence to act. Certainly a lot has changed here since your time.

Despite these inhibiting factors, we are, fortunately, continuing to experience people’s selfless acts directed at rescuing others. This requires bravery and civil courage. The recognition of such acts serves us and our descendants as a model for a humane society.

In our foundation, we consequently believe that your initiative has not only set important developments in train, but also that the recognition of lifesavers remains equally valid today as in your time, for rescuers themselves as well as for all of us, and highlights important examples of praiseworthy behaviour.

We therefore continue to remain grateful today that you and Mrs. Carnegie drew conclusions from a personal experience that continue to remind us now, more than 100 years after your death, of what constitutes the core of a humanitarian society: civil courage and a shared sense of community.