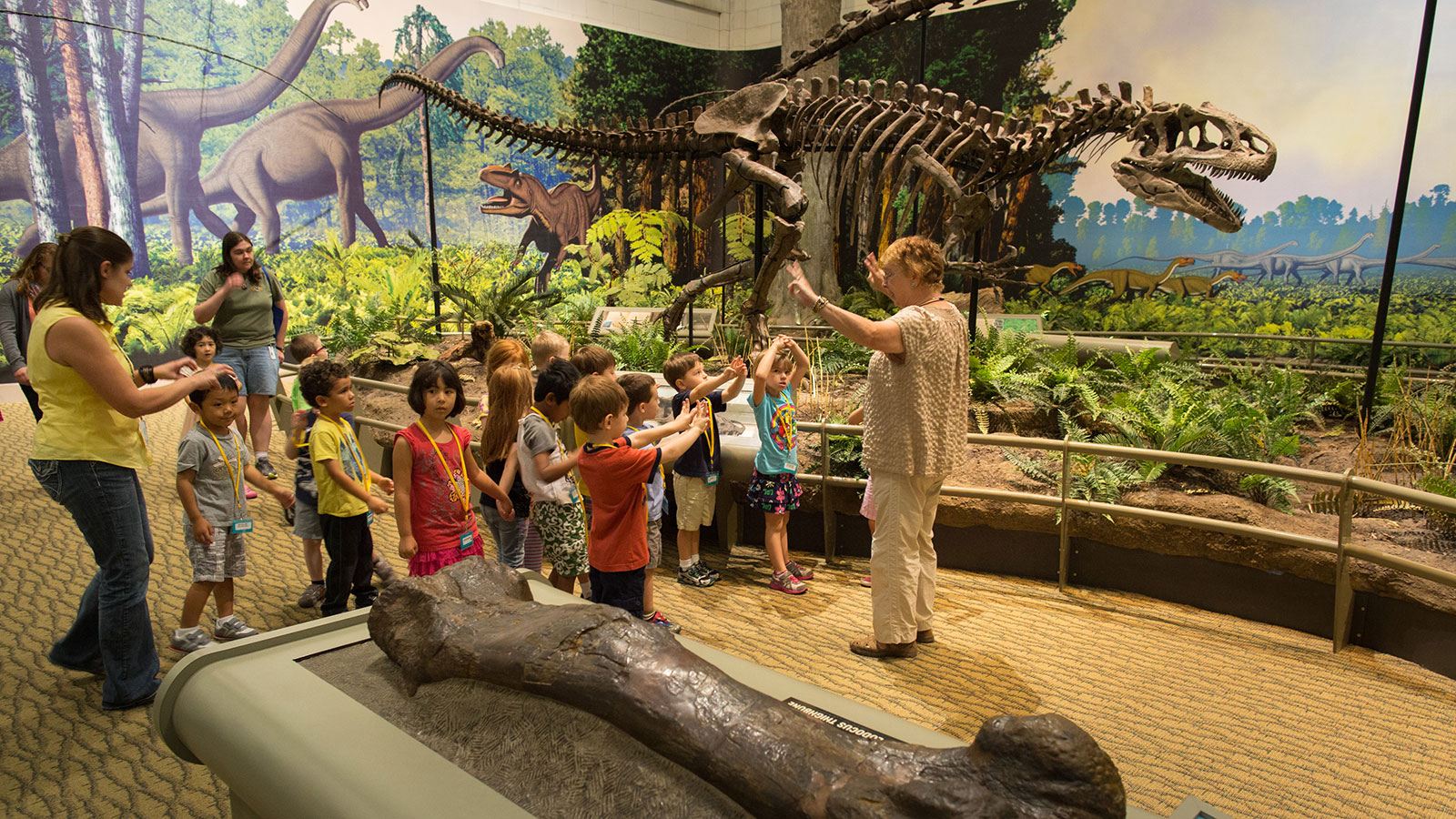 I am honored to represent Carnegie Museums of Pittsburgh as I report to you on the progress of this, your “palace of culture,” which you gifted to Pittsburgh 124 years ago.

It all began, of course, with the construction of your magnificent building — your “monument,” as you called it — situated in what is now the Oakland neighborhood of Pittsburgh, Pennsylvania, and home to your beloved library, museums, and music hall. We know from your archived correspondence that you reveled in every detail of the building’s design and the many impressive acquisitions of its earliest contents.

At the building’s dedication ceremony on November 5, 1895, you spoke with great emotion about the vision you had for your museums. We’ve decided to use those words as a guide as we consider how the Carnegie Museums of today continue to carry out your noble vision.

“My aspirations take a higher flight,” you said to the attentive crowd gathered that day. “Mine be it to have contributed to the enlightenment and the joys of the mind, to the things of the spirit.”

We’re so proud to report that your high-flying hopes and dreams for your museums have been realized, many times over, and they continue to be celebrated, not only in Pittsburgh but the world over. Most importantly, the museum family you created continues to change lives. You believed museums had the power to transform, by inspiring and challenging the individual. And you were so right!

Physically, the contemporary Carnegie Museums carried out your vision through an ambitious period of growth, beginning in 1974 with the addition of the Sarah Scaife Galleries, which gave Carnegie Museum of Art’s constantly growing collections their own elegant space. In 1991, Carnegie Science Center entered the Carnegie Museums fold, serving as a town square of hands-on learning about the science of everyday life, as well as a leader in the STEM learning movement — the application of science, technology, engineering, and math principles; being curious about the world around you, asking questions, and acquiring problem-solving skills. Only three years later, Carnegie Museums again brought something new and irreplaceable to Pittsburgh and the world: The Andy Warhol Museum, the most comprehensive single-artist museum ever built — a fitting tribute to another son of Pittsburgh, who was a graduate of another of your gifts to the city, Carnegie Institute of Technology (known today as Carnegie Mellon University), and who defined what we know as Pop art.

More recently, the expansion and reimagining of your world-renowned dinosaur hall produced Dinosaurs in Their Time, an exhibition truly worthy of its incredible inhabitants, not to mention the first permanent dinosaur exhibition in the world to feature real specimens in scientifically accurate, immersive environments spanning the Age of Dinosaurs. All told, the Carnegie Museum of Natural History today houses 20 galleries that display up to 10,000 artifacts and specimens. And its collection continues to grow as museum scientists undertake fieldwork around the world — from the study of amphibians in Borneo to the unearthing of new dinosaurs in the Antarctic.

All of that physical growth has led to what we believe is a Carnegie Museums family you would still consider “one of the chief satisfactions of my life,” as you put it — four diverse museums that lift up individuals and communities through their commitment to educational programming and one-of-a-kind experiences that inspire people of all ages, backgrounds, and interests to explore their world. Carnegie Museums today employs more than 1,000 people, including renowned scientists and curators, greatly enriches the quality of life of the region’s residents, and attracts hundreds of thousands of out-of-town visitors each year.

All told, our museums reach 1.5 million people annually, many of them schoolchildren who still look up in wonder at the stately architectural casts and imposing dinosaur skeletons that the people of Pittsburgh marveled at well over a century ago.It’s true that, today, most of those schoolchildren have digital access to seemingly limitless amounts of information and entertainment — the kind of access that the men, women, and children of 1895 Pittsburgh couldn’t even dream about. But there’s still something profound about seeing Winslow Homer’s The Wreck or Claude Monet’s Water Lilies up close and in person. And nothing can replace standing beneath the long, elegant skeleton of your namesake, Diplodocus carnegii — the real bones of an animal that roamed Earth more than 160 million years ago.

You were particularly proud to tell your guests at that November 1895 gathering that “already, many casts of the world’s masterpieces of sculpture are within these walls. Ultimately, there will be gathered from all parts of the world casts of those objects which take highest rank.”

You were speaking of what would become the great Hall of Architecture, completed by you in 1907 after Carnegie Museums’ first expansion. That hall continues to engage visitors of all ages with its more than 140 casts of architectural fragments of significant buildings. The Romanesque façade of Saint-Gilles-du-Gard, which was commissioned by you specifically for the Hall of Architecture, is still the breathtaking centerpiece of the collection.

In the decades that followed, scores of museums would rid themselves of their cast collections because of space concerns, and because they felt they no longer had any real value. But we continue to celebrate our architectural casts today. In fact, Carnegie Museum of Art’s architectural cast collection is one of only three still in existence; the others are London’s Victoria & Albert Museum and Paris’s Cité de l’Architecture et du Patrimoine. We’re incredibly proud of this fact. What’s more, the museum’s curatorial team is committed to finding new ways to make this stunning collection even more relevant to audiences today. In 2017, the museum organized an innovative exhibition titled Copy + Paste, which looked back at the history of the hall while also looking forward. With the help of colleagues from neighboring Carnegie Mellon, that exhibition experimented with such new technologies as augmented reality and 3D printing — all with the intent of making the Hall of Architecture accessible and inspiring to future generations.

At that 1895 dedication ceremony, you also spoke of the joy that art brought to your life — and when, as a boy, you “first awoke to the sense of color, and what an awakening it was and has been.” I’m sure you would be pleased to know that countless children get the chance to have similar awakenings each year when they visit your museums and participate in classes and camps. Alyssia Lowe, a participant in a workshop that encouraged young people to tell their stories through art, had this to say about her own awakening: “To see all of this in person was a life-changing event that I will be forever grateful for. I learned so much about who I am and what I can and will do in my future.”

Clearly, few things excited you quite as much as the far-reaching potential of your Carnegie Museum of Art and what would become the Carnegie International, an exhibition that has served as an ongoing survey of contemporary art since 1896 — first American art, and then the art of the world. “There is a great field lying back of us, which it is desirable that some institution should occupy by gathering the earliest masterpieces of American painting from the beginning,” you told the crowd that November day. “But the field for which this Gallery is designed begins with the year 1896. From next year we may hope that the Nation will have something worthy of being considered in after years a record from year to year. … If this fond hope be realized, then Pittsburgh will be famous for art as it is now for steel.”

“My aspirations take a higher flight,” you said to the attentive crowd gathered that day. “Mine be it to have contributed to the enlightenment and the joys of the mind, to the things of the spirit.”

Today, the Carnegie International is the oldest exhibition of international contemporary art in North America, and the second oldest in the world. Most importantly, it continues to educate and inspire countless audiences, promote the international understanding of art, support the work of contemporary artists, attract the art world to Pittsburgh, and help build and diversify the Museum of Art’s expansive collections.

The 57th edition of this great tradition just ended in March 2019, featuring the contemporary work of 32 international artists. I think you’d find one of the art installations particularly interesting: the work of Tavares Strachan, a Bahamian-born and now New York-based artist. His colorful additions to the exterior of your great building proved to be one of the exhibition’s most popular artworks.

“I was just curious about the names they already had on the building, and so I just wanted to think about editing, or adding to that list of names people who might be invisible, or who might not ever end up on a building,” Strachan said. So he used multi-colored neon lettering to affix the names of modern-day musicians, social activists, authors, and scientists between names of the likes of Aristotle, Darwin, Leonardo, Mozart. Among the names that he added to the building were Matthew Alexander Henson, a black Arctic explorer who was among the first to reach the North Pole, and Qiu Jin, a feminist poet and revolutionary, who became known as “China’s Joan of Arc.”

Strachan’s addendum to history is emblematic, in a way, of a quite serious effort among contemporary cultural organizations the world over to diversify their collections, their exhibitions, and their programming in order to be more inclusive of the world around them. As a purveyor of ideas, Carnegie Museums takes seriously this need to make all audiences feel welcomed and represented. The Carnegie International is just one of numerous examples of how our museums are working towards this important goal.

Without a doubt, for me the words that still resonate most from your November 5, 1895, remarks are these: “No man can become rich without himself enriching others.”

Your Carnegie Museums were an incredibly thoughtful, forward-looking gift to a city that, at the time, was known entirely for its grit, not its culture. That was exactly the point: that each of us should have the opportunity to explore unknown worlds, past and present, right where we live, and become better for that exploration. And while you supported your initial dream financially, you fully expected many others to follow suit. And many did — including the Heinz, Mellon, and Buhl families, whose patriarchs were your peers in building our great city. The museum projects they helped make possible include the addition of Museum of Art’s Scaife wing and Heinz Architectural Center, and the Science Center’s Buhl Planetarium.

An impressive number of individuals and organizations continue to support the four Carnegie Museums generously today. They believe, as you did, in their transformational power. They are true believers in your cause, believers in your legacy — as are the women and men I am so proud to work with in the museum family that still carries your name.