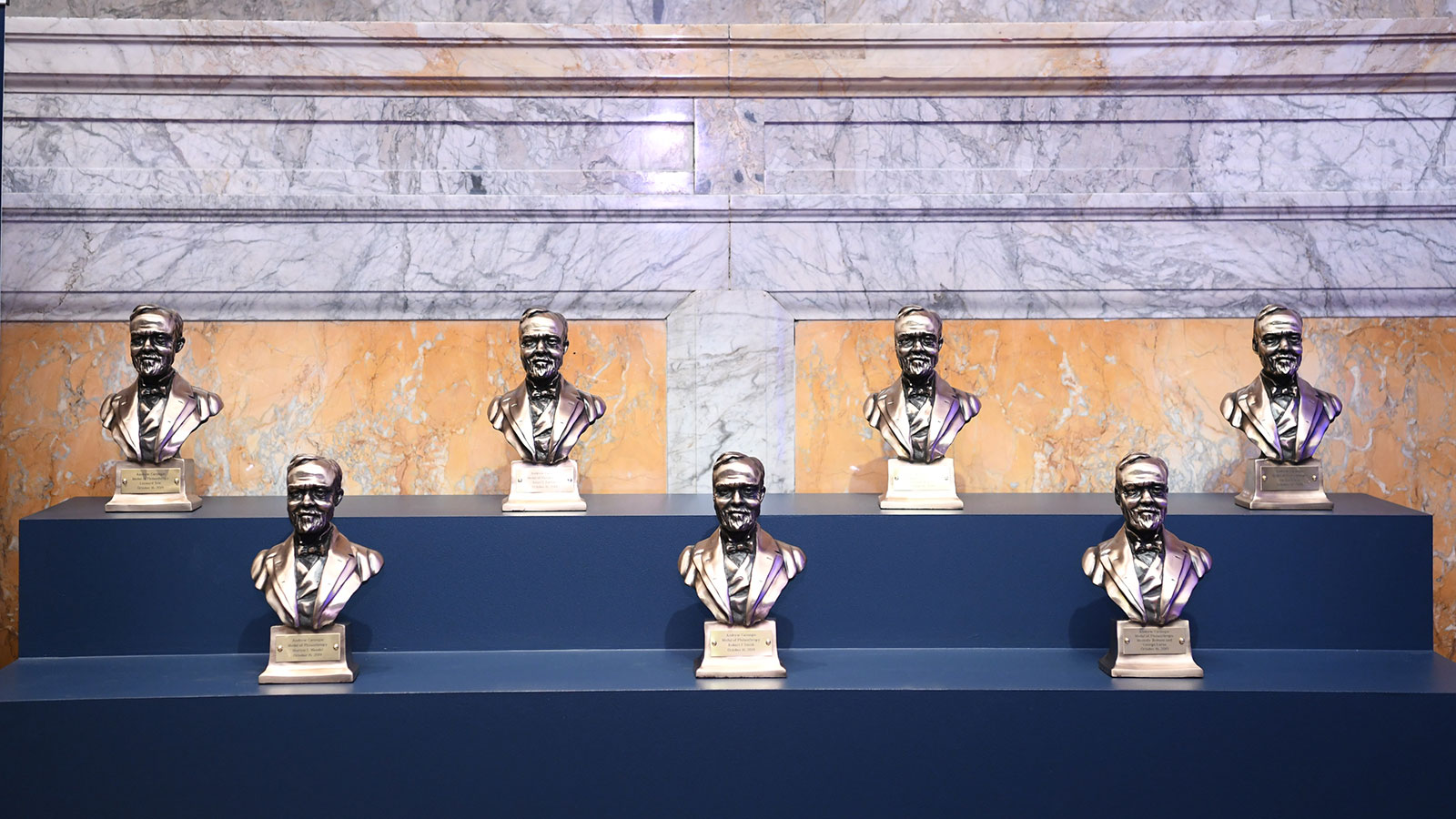 A Salute to the 2019 Carnegie Medal of Philanthropy Honorees

The Carnegie family of institutions honored nine distinguished philanthropists with the 10th Carnegie Medal of Philanthropy at a ceremony at The New York Public Library on October 15, 2019. The medalists were recognized for their extraordinary impact in addressing some of society’s most entrenched problems and for carrying on the philanthropic vision of Andrew Carnegie to do “real and permanent good in this world.” This year’s celebration was a capstone to a series of events commemorating the centenary of the great philanthropist’s death. The honorees are:

To begin the festivities, a bagpiper led the procession of the medalists into the Celeste Bartos Forum to the tune of “Scotland the Brave,” a tribute to Andrew Carnegie’s Scottish heritage.

“We gather here today, not only to recognize nine extraordinary individuals, but also to celebrate Andrew Carnegie — a man whose revolutionary vision and philanthropic impact has spanned generations,” said Tony Marx, the president of The New York Public Library, welcoming the guests.

Marx introduced Vartan Gregorian, the president of Carnegie Corporation New York, who thanked those who were following in Carnegie’s footsteps. “Were he here today, Andrew Carnegie would have saluted the philanthropists who are in our midst — especially past and present Carnegie Medal of Philanthropy recipients,” said Gregorian. “He would have been gratified by your vision, compassion, and commitment to humanity.”

Gregorian next introduced William Thomson, the great-grandson of Andrew Carnegie and chairman emeritus of the Carnegie UK Trust, who reflected on Andrew Carnegie’s belief “that mankind could achieve greater things” and “his commitment to contributing to … ensure the betterment of society.” Thomson then introduced Reverend Maryann R. Rennie, who spoke on the life, legacy, and influence of Andrew Carnegie.

After the opening remarks, Citizens of the Blues, a quartet featuring some of the finest young musicians on the New York jazz scene, performed for the guests.

The day’s master of ceremonies, award-winning journalist Judy Woodruff, touched on the incredible power of philanthropy and the transformative work of the medalists. Woodruff noted the impact of the 2019 medalists at a time when society is facing serious threats to peace and progress. She said, “Each of the medalists is helping others to discover, understand, and build a better future for all of us. Their philanthropy is delivering life-changing benefits today, and its impact will be felt for many generations to come.”

All of the medalists were introduced with a video demonstrating their impact as told through the experience of a beneficiary of their giving. Later that evening, the iconic Empire State Building was lit to honor the medal recipients and to celebrate the legacy of Andrew Carnegie.

On a sad note, Morton L. Mandel was unable to attend the Carnegie Medal of Philanthropy awards ceremony due to a sudden illness, and Jehuda Reinharz, president of the Jack, Joseph, and Morton Mandel Foundation, accepted the medal on his behalf. Later in the day, Carnegie Corporation of New York was informed that Mr. Mandel had passed away on October 16, 2019, the same day that his philanthropic legacy was formally recognized by his being honored with the Carnegie Medal of Philanthropy. The entire family of Carnegie institutions expresses its condolences to the family, friends, and colleagues of Morton L. Mandel.

The medal ceremony also featured the premiere of Carnegie Medal of Philanthropy: Andrew Carnegie’s Legacy of Giving. Narrated by Candice Bergen, this new film reflects on the impact of Carnegie’s philanthropy over the course of the past 100 years, and how we might forge the future of Carnegie’s legacy in the coming century. Following the film, Citizens of the Blues performed “Crossing the Bar,” giving the audience a moment to meditate and reflect on the video tribute.

The ceremony concluded with the reminder that the Carnegie Medal of Philanthropy is meant to inspire us all to act “for the good of the people,” a mantra by which Andrew Carnegie lived.