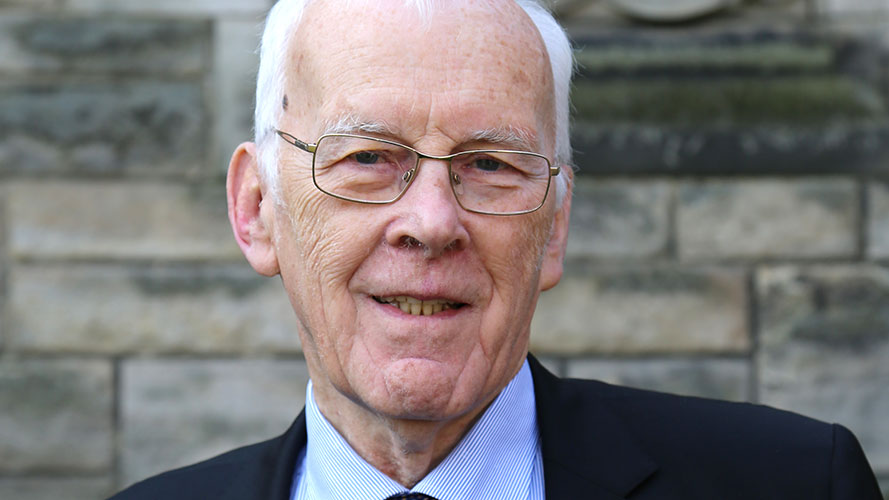 In The Gospel of Wealth, Andrew Carnegie described how the privileged class could benefit society by creating “ladders upon which the aspiring can rise.” The life-changing impact of Sir Ian Wood’s philanthropy exemplifies that principle, offering hope that extends from the classrooms of Scotland to the fields of sub-Saharan Africa.

Accolades have followed businessman Sir Ian Wood since his early days starting out in his family’s fishing business in Aberdeen, Scotland. His far-ranging vision helped grow the modest outfit serving a local community into a behemoth energy company employing 43,000 people in diversified operations in more than 50 countries. As chairman and chief executive, Sir Ian took the Wood Group public in 2002, eventually leading it to become listed in the UK FTSE 100 index.

Already a benefactor to public works projects in Scotland, Sir Ian decided to retire from the Wood Group in 2012 in order to commit fully to the work of The Wood Foundation, which he had established with his family in 2007.

According to Sir Ian, “We all have an underlying responsibility in this world for each other,” and The Wood Foundation is his vehicle for carrying out that mission. In Tanzania and Rwanda, The Wood Foundation’s Venture Philanthropy Transforming Livelihoods in Africa stream of activity has extended long-term credit to 70,000 smallholder tea farmers, while providing in-depth operational and marketing support that has enabled those farmers to expand their tea fields and their earnings. The foundation also operates field schools that help 3,000 new farmers annually to develop essential agronomic skills. Through this work, The Wood Foundation Africa has significantly enhanced the production and quality of tea produced in both Tanzania and Rwanda, while building the infrastructure and markets to ensure that the industry is sustainable.

The Wood Foundation’s Developing Young People in Scotland portfolio is cultivating the next generation of active citizens to contribute to the country’s future social and economic well-being. Working with local schools, the foundation has benefited thousands of young people by offering training in enterprise and employability skills, creating meaningful STEM learning opportunities, and alleviating child and youth poverty. Its Youth and Philanthropy Initiative takes a novel approach to encouraging young people to play a leadership role in giving back within their own communities. Each year, more than 35,000 young people take a hands-on role in channeling the foundation’s resources to local charities, developing confidence and communication skills while making a difference in their communities.

The Wood Foundation is also responsible for establishing Scotland’s first private-sector-led economic development body, Opportunity North East (ONE), which aims to spark an economic renaissance in Sir Ian Wood’s home of Aberdeen City and Shire. ONE provides business and skills development and fosters technological innovation, including strategies to realize the potential of digital. It also invests heavily in people through the provision of education, training, and resources that equip local residents to thrive in a transforming economy. These initiatives are already beginning to accelerate economic growth in northeast Scotland.

The Selection Committee believes that Andrew Carnegie would celebrate the indisputable “ladders” to self-empowerment created by his fellow Scotsman,
Sir Ian.

The Carnegie family of institutions is honored to welcome Sir Ian Wood as a recipient of the Carnegie Medal of Philanthropy.