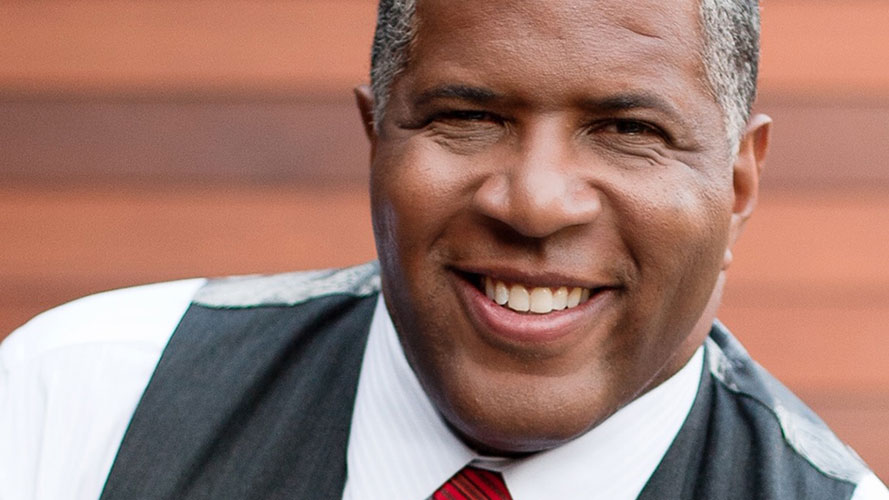 In The Gospel of Wealth, Andrew Carnegie directed the wealthy to do “what is practicable now, with the next step possible in our day and generation” to address the problems of the world. Robert F. Smith’s bold philanthropy aligns directly with Carnegie’s vision, as evidenced by his strategic investments in society and his powerful appeals for others to join him in giving back to their communities.

The value of education was instilled in Robert Smith from a young age. His parents both earned PhDs and worked as teachers before becoming high school principals. Following in their footsteps, Mr. Smith received his undergraduate degree in chemical engineering from Cornell and then earned an MBA from Columbia University.

After business school, Mr. Smith joined Goldman Sachs, where he rose to become co-head of Enterprise Systems and Storage at the investment bank in Silicon Valley. In 2000 he left to set up his private equity and venture capital firm, Vista Equity Partners. As founder, chairman, and CEO of Vista Equity, now the fourth-largest enterprise software company in the world, Mr. Smith oversees a portfolio of over 60 software companies and more than $50 billion of cumulative capital commitments.

Mr. Smith’s philanthropy honors the sacrifices and contributions of his parents, grandparents, and African American ancestors who paved the way for his remarkable achievements. His giving includes significant support for the educational and professional advancement of African Americans. That commitment was made manifest during a recent commencement speech at Morehouse College, in which he shocked the entire assembly by announcing a grant to eliminate the student loan debt of the 2019 graduating class. Mr. Smith used the occasion to encourage students to give back to their communities and to “make sure that every class has the same opportunity going forward.”

While that life-changing gift earned worldwide attention, it is only one example of Mr. Smith’s generosity. He also champions the vital role of the arts by funding music education programs for K–12 students and through his involvement in Carnegie Hall, where he has served as the chair of the board of trustees since 2016. He is also president and founding director of Fund II Foundation, which supports a range of initiatives like InternX to create opportunity for underrepresented minorities entering the workforce. The foundation also contributes generously in the fields of health, the environment, and human rights.

Mr. Smith’s devotion to preserving and sharing stories of the African American experience prompted him to make the largest private donation to the Smithsonian’s National Museum of African American History and Culture. The Fund II Foundation also sponsored the groundbreaking “1619 Project” published by the New York Times. Through these efforts, Mr. Smith aims to lift up and celebrate the vital contributions of African Americans to our nation, to show that “African Americans are at the center of it all.”

The Selection Committee believes that Andrew Carnegie would admire Mr. Smith’s emphasis on education and support for current and future generations.

The Carnegie family of institutions is honored to welcome Robert F. Smith as a recipient of the Carnegie Medal of Philanthropy.