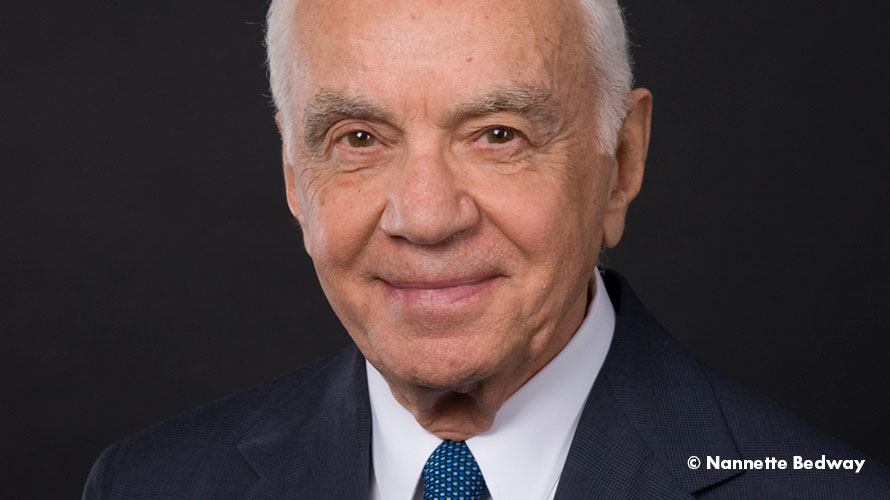 Throughout his career Morton Mandel has made it a priority to “invest in people with the values, ability, and passion to change the world.” By developing the next generation of innovators, creators, and achievers, Mr. Mandel echoes Andrew Carnegie, who observed in 1908: “It is the leaders who do the new things that count.” Perhaps like Carnegie, the educational and leadership initiatives supported by this successful, self-made businessman also reflect an understanding of what it takes to rise from humble beginnings to great success.

Privilege did not come easily to Mr. Mandel, but the hardships of his youth imbued him with the importance of family, a strong work ethic, and an abiding allegiance to a civil society. Growing up, he witnessed the remarkable sacrifices of his working mother to ensure the dignity of others in their community. Such selflessness and self-reliance became hallmarks of Mr. Mandel’s philanthropy.

After high school, Mr. Mandel enrolled in Adelbert College, now Case Western Reserve University, but left before completing his degree to join his brothers Jack and Joseph to co-found Premier Automotive Supply Co. After enlisting in the Army in World War II, Mr. Mandel was offered the opportunity to study engineering at Pomona College and UC-Berkeley as part of his military service. Just 16 hours short of a degree in chemistry, he separated from the Army and chose to rejoin his brothers at their company.

Mr. Mandel later became chairman and CEO of their company. Together, the Mandels made astute business decisions and the company grew rapidly, eventually becoming a publicly traded company in 1960. Recognizing their good fortune, Mr. Mandel and his brothers wanted to give back. In 1953, they established the Jack, Joseph and Morton Mandel Foundation to broaden, formalize, and add structure to the generous giving that by then had become second nature for the trio.

The foundation is committed to fostering “just, inclusive, compassionate, and democratic societies” in the United States and Israel. Its strategic approach is based on investments in people with the will and the talent to change the world for the better, cultivating leaders who can rise to the demands of complex times.

Since his brothers passed away, Morton Mandel has made it his mission to sustain and expand the impact of their foundation. As part of that effort, he has established the Mandel Center for the Humanities at Brandeis University and the Mandel School for Advanced Studies in the Humanities at Hebrew University of Jerusalem. The foundation also awarded a generous grant for a new building and programs for the Mandel Institute for Social Leadership at Ben-Gurion University of the Negev. Recently the foundation awarded a substantial grant to the Cleveland Clinic to establish the Mandel Global Leadership and Learning Institute. The impact of Mr. Mandel’s giving is seen not only through those institutions, but through their alumni, who are making a difference in fields ranging from education to health care, and beyond.

In addition to the philanthropic activities of his foundation, Mr. Mandel and his wife, Barbara, also give generously as a couple. In 2018, the Mandels bolstered the capital of their foundation by selling their highly valued art collection at Sotheby’s. The proceeds of the sale have been used to further advance the foundation’s philanthropic goals.

Mr. Mandel’s unwavering belief in the value of leadership and education can also be seen his own life: he made the ambitious decision to return to Case Western Reserve University, where, in 2013, he completed the bachelor’s degree that he had started 75 years earlier.

The Carnegie family of institutions is honored to welcome Morton Mandel as a recipient of the Carnegie Medal of Philanthropy.