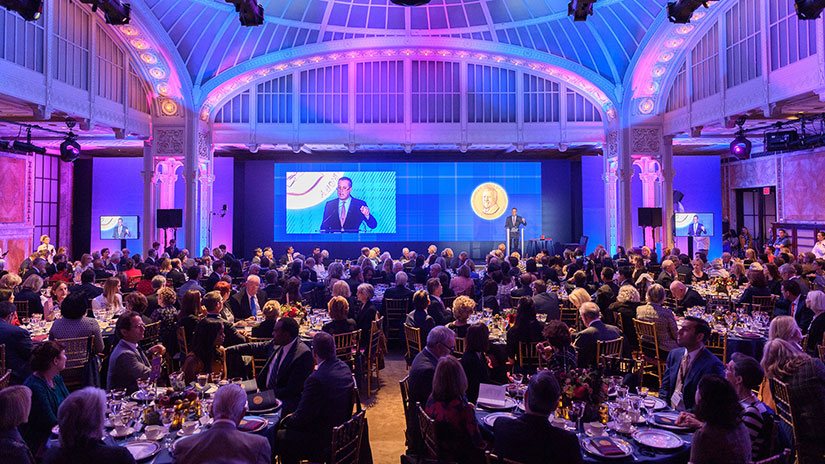 A Tribute to the 2017 Carnegie Medal of Philanthropy Honorees

On a beautiful October afternoon, more than 300 distinguished guests — including Vartan Gregorian, Yo-Yo Ma, and Big Bird! — gathered in the Beaux-Arts splendor of The New York Public Library’s Bartos Forum to salute the “awe-inspiring” munificence of this year’s medalists

It was a day to honor those who use their success and stature to take on some of the world’s biggest problems. More than 300 guests came to The New York Public Library’s Stephen A. Schwarzman Building on Tuesday, October 3. The reason? To celebrate nine of the most influential philanthropists on the planet, recipients of the 2017 Carnegie Medal of Philanthropy, named in honor of the “father of modern philanthropy,” Andrew Carnegie.

A bagpiper led the procession of the medalists into the Bartos Forum, a tribute to Carnegie’s Scottish heritage. After a round of applause for the medalists, Tony Marx, president of The New York Public Library, welcomed the guests with remarks about the power of philanthropy. Marx then welcomed the president of Carnegie Corporation New York, Vartan Gregorian, who enlightened the crowd about the exceptional achievements of this year’s medalists. “Indeed, the munificence of the Carnegie Medal recipients is not only remarkable, but awe-inspiring,” said Gregorian. “You are living examples of Andrew Carnegie’s philanthropic legacy and of those who have followed in his footsteps. You have all dedicated not only your personal wealth, but your reputations, your time, and your talents to causes of deep significance to you and to your communities: namely education, international peace, the environment, the arts, the protection of our democracy, and much, much more.” Gregorian then introduced a video explaining the origin and the purpose of the Carnegie Medal of Philanthropy.

As the morning moved to afternoon, Yo-Yo Ma and the Silk Road Ensemble took to the stage to perform a selection of instrumental songs and dances, highlighted by Sandeep Das’s haunting tabla solo.

Dr. Gregorian welcomed the day’s master of ceremonies, BBC World News America presenter Katty Kay, who touched on a variety of themes as she warmed up the crowd before the presentation of the medals. “Today,” said Kay, “philanthropy is being called upon to play an even greater national and international role — in fighting poverty and other global ills, in funding research and development on issues like climate change and nuclear nonproliferation, and in sustaining democracy at home and around the world. Helping the people and the causes that need it most must always be the priority. Our former, current, and future medalists are all keenly aware of this.”

Kay then brought each of the medalists on stage in turn, displaying videos detailing their philanthropic efforts.

Gerry and Marguerite Lenfest spoke of the moment they came into great wealth. “All of a sudden,” recalled Gerry Lenfest, “I was a billionaire. Having all that money made me think of one word — responsibility. I came to certain conclusions. Not to die with wealth.” The couple also spoke of their philosophy of giving, noting that they wanted professionals running their organizations, not family or friends.

Next, Sir James Wolfensohn accepted the medal with a salute to the American dream: he came to this country from Australia with nothing — and, with success, he has gone on to make a real difference in the world. He offered some commentary on the modern state of giving. “With the younger generation,” he observed, “it’s very useful to pass on the lessons I’ve learned. Many of them know a lot about technology, but don’t know very much about giving money away.”

Next to the stage was Kristine Tompkins, who proudly sported a bracelet crafted — on the spot — from the Carnegie tartan of her cloth napkin ring. She focused her statement on the satisfaction she finds through her work in philanthropy. “Getting up every day and focusing on the things we love has brought new dimensions into our personal lives that we never thought imaginable.”

When Azim Premji took the stage, philanthropy’s global progress came front and center. Premji remarked on the differences between succeeding in business versus philanthropy. “The time dimensions are much longer in philanthropy. It requires significantly more patience, more sustaining power and a larger base of people.”

The afternoon took quite a turn with the next guest. Big Bird was accompanied by Sherrie Westin, executive vice president for Global Impact and Philanthropy at Sesame Workshop. Big Bird told the crowd about his Yellow Feather Fund, which brings educational materials to children in need all around the world. Before he left the stage, Dr. Gregorian couldn’t help but steal a quick hug from the very big, very yellow Big Bird.

Then, back to the medalists. Kay welcomed Shelby White, who spoke about her personal connection to the causes that she supports and also touched on the changing nature of philanthropy. “I would hate,” White cautioned, “to see philanthropy become something that is totally obsessed with measurable results, near term.”

The global nature of the 2017 honorees was reinforced when Mei Hing Chak accepted her medal. Chak spoke about some of the differences between China and other parts of the world when it comes to giving. “I hope that helping others can become a social custom in China. And I hope that philanthropy can become a type of social culture.”

The man known by many as the “Wizard of Wall Street” had a very specific focus when acknowledging his medal. Julian Robertson said: “I think the environment is extremely important, and want to see there is a world that our progeny can live in. We have to work if we want that to happen.”

Unfortunately, Jeff Skoll, the final medalist honored at the luncheon, was unable to attend the ceremony. Skoll’s parents, Mort and Judy Skoll, accepted the medal on his behalf, while Sally Osberg, CEO of the Skoll Foundation, spoke about Jeff Skoll’s commitment to creating an organization that works toward a world of peace and prosperity.

Katty Kay concluded the afternoon by summing up the sentiments of the Carnegie Medal of Philanthropy with a quote from Andrew Carnegie himself: “Wealth is not to feed our egos, but to feed the hungry and to help people help themselves.”