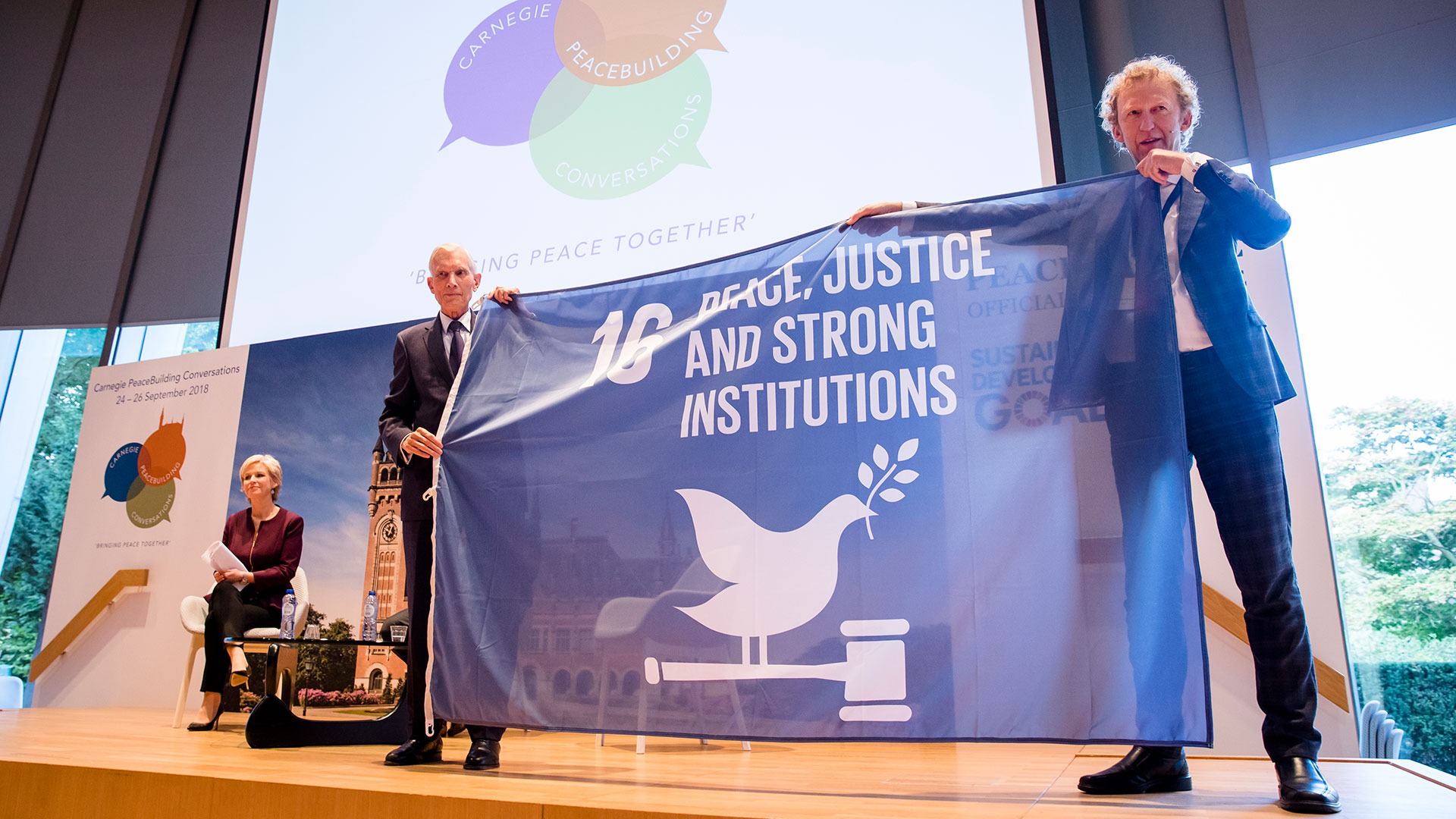 At the end of the 19th century, the last Russian Tsar, Nicolas II, initiated an international peace conference with the aim of stopping an ongoing series of wars in Europe. In need of a neutral venue for peace talks he approached Queen Wilhelmina of The Netherlands to host the conference. Consistent with its policy of neutrality, the Dutch government agreed to serve as host for the peace conference.

Many issues were discussed, but one crucial notion followed from the conference: Peace through Law.

Humanity would be saved from warfare, loss of lives and goods, if battles were no longer fought on the battlefield, but in the courtroom. A Permanent Court of Arbitration and international laws would be established to prevent political conflicts from becoming violent. To host this court, a new building would be constructed to serve as a symbol of world peace – the Peace Palace.

In need of funding, Queen Wilhelmina of The Netherlands wrote a letter to Andrew Carnegie. He responded favorably to the call and donated $1.5 million to construct the Peace Palace. To manage his donation, he created the Carnegie Foundation in 1903. The Peace Palace opened its doors in 1913, a day Carnegie described in his diaries as “the happiest day” of his life.

A century after Andrew Carnegie’s passing, the Carnegie Foundation still owns and manages the Peace Palace. Today it continues its mission as a “temple of peace and justice,” to prevent conflicts, to solve conflicts peacefully, and to promote world peace.

Along with the Permanent Court of Arbitration established by the First Hague Peace Conference of 1899, the Peace Palace also houses the International Court of Justice. This Court is the main juridical organ of the United Nations, making the Peace Palace the only building outside New York that hosts a principal organ of the United Nations, mentioned in the UN Charter.

“These goals provide an excellent framework for dialogues on the future of the world. Especially ground-breaking in the SDG’s is that a specific goal is set to promote Peace, Justice and Strong Institutions: Goal 16,” said Erik de Baedts, Director of the Carnegie Foundation- Peace Palace.

As the international SDG 16 House, the Peace Palace will serve as the official convening location for dialogue and events on the promotion of the SDGs, including the integration of SDG 16 with the other sixteen SDGs. The Peace Palace has committed itself to promoting progress on these imperatives, and to linking the sixteenth SDG, “Peace, Justice and Strong Institutions,” with the other SDG goals such as No Poverty, Zero Hunger, Quality Education, Gender Equality, Clean Water, and Climate Action.

“The Sustainable Development Goals of the United Nations are the most important goals that the world must work on. The Peace Palace is an historic place, a place full of ideals, historic achievements and results, a place with a mission,” said Erik de Baedts. “As we look toward the next 100 years, forging the future of Andrew Carnegie’s legacy, we look forward to progressing the global SDG agenda, bringing us closer to our founder’s vision of world peace.”