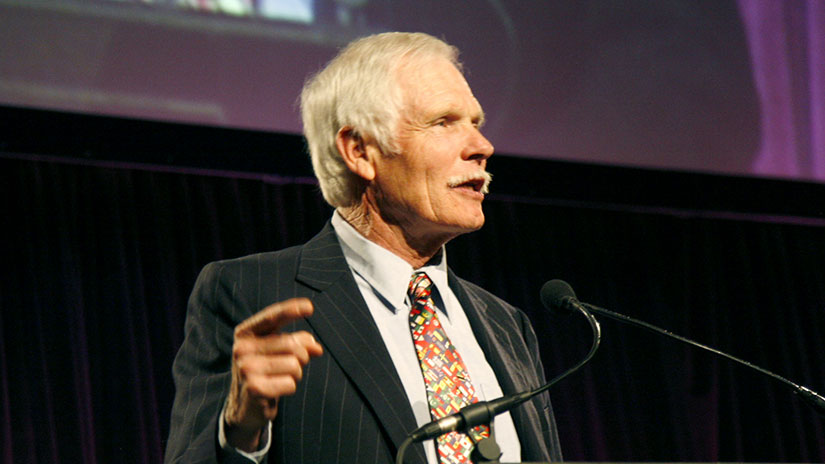 As a media tycoon, Ted Turner knows all about staying in the news. At the age of 78, Turner remains a steady presence, featuring regularly across the press in a variety of incarnations. Certainly, it is hard to imagine a more interesting person to keep tabs on. One week it will be a report on his bison farming efforts. The next it will be an article reminiscing about his forays into the world of wrestling. His name is still a hot topic in the sailing world, as well as popping up occasionally on the society pages – thanks to his knack for quotes and memorable marriages. But lately the creator of the Cable News Network (CNN) has been in the news for some of his most celebrated and worthy work: his efforts at saving the environment and promoting peace throughout the world.

In 1997, Turner launched the United Nations Foundation with a $1 billion gift. As an organization, it continues to work with the United Nations to address issues including child health, climate change and energy, and sustainable development. In addition, the gift functioned as a proto-Giving Pledge, with Turner calling on other wealthy Americans to follow his lead, telling the New York Times, “There’s a lot of people who are awash in money they don’t know what to do with. It doesn’t do you any good if you don’t know what to do with it.” Of course, as one of America’s most prominent businessmen, it is no surprise that Turner was one of the first to sign the Giving Pledge when Bill Gates and Warren Buffet got the ball rolling in 2010.

The United Nations Foundation gift only hints at how deeply Turner wants the world to be a better place. Having countries and leaders work together is a great first step, but that is clearly not enough for Turner. His other efforts go to extraordinary lengths to help make the world a better, safer place. His Captain Planet initiative is aimed at educating youngsters about the environment. The cartoon, fondly remembered by children from the 90’s, still has resonance, with the Captain Planet Foundation one of the most active organizations in promoting ecological stewardship to the youth.

Turner has put serious financial fire power behind his concerns. He funds a whole family of organizations that are tackling climate change, disappearing habitats, and other environmental concerns from a number of angles. The Turner Foundation and the Turner Endangered Species Fund are both targeted efforts to protect and restore the natural world. And the bison that Turner raises (well over 55,000 at this point) are not because he is an eccentric billionaire, but because he sees this farming as the way forward for sustainable and healthy meat.

Ted Turner is not bashful about taking risks. But he is doing everything he can to eliminate risk to the planet we inhabit. Along with the previously mentioned programs, he is behind the Nuclear Threat Initiative and a member of the Ocean Elders. He is man who has had many adventures across the globe, and he is doing everything in his power to ensure that the world remains available for future adventurers. That is surely a newsworthy ambition.