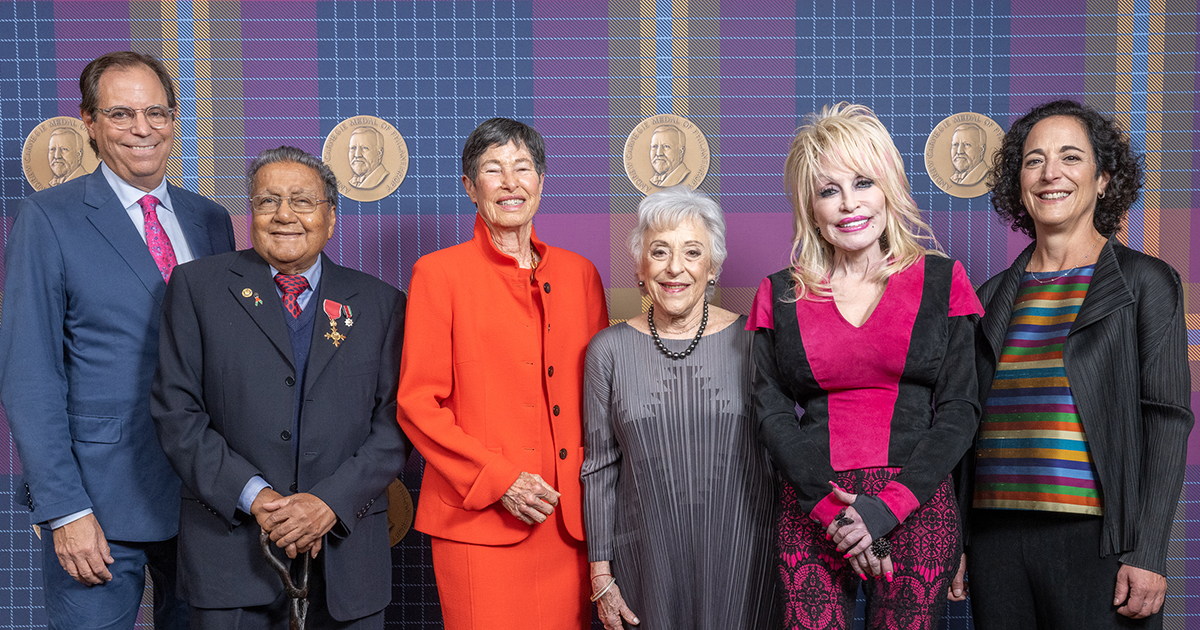 Celebrating the Recipients of the 2022 Carnegie Medal of Philanthropy

The philanthropic community gathered Thursday night, October 13, in New York City for the Carnegie Medal of Philanthropy awards, which this year are marking their 20th anniversary. Hosted by the international family of institutions established by Andrew Carnegie, the ceremony honored five distinguished philanthropists for their extraordinary efforts to address the challenges facing our world: Manu Chandaria, Lyda Hill, Dolly Parton, Lynn Schusterman, and Stacy Schusterman. The goal of the medal is to inspire a culture of giving by recognizing innovative philanthropists who are helping to make the world smarter, cleaner, healthier, and more equitable.

For advancing opportunity and addressing critical needs in Africa through investments in health-care infrastructure, secondary and higher education, poverty relief, and environmentalism.

For investments in the life sciences, including cancer and mental health research and treatment; conservation; supporting women in STEM fields and inspiring girls to be interested in STEM careers; and empowering community-based nonprofits to maximize impact.

For alleviating poverty, strengthening early childhood education through the distribution of free books worldwide, increasing college access, and advancing medical research, including on pediatric infectious diseases and the development of a COVID-19 vaccine.

For advancing racial, gender, and economic equity through investments in areas such as K–12 education, democracy and voting rights, gender and reproductive equity, and criminal justice; and supporting Jewish communities and a secure, inclusive Israel.

Founded by chef José Andrés in 2010, the organization is recognized for mobilizing volunteers to provide meals in communities affected by humanitarian and natural disasters. World Central Kitchen has served more than 150 million meals in countries around the world, and the organization continues to build one of the largest food relief organizations in Ukraine during the current conflict.

The Carnegie institutions also presented the inaugural Carnegie Catalyst Award to World Central Kitchen for providing meals in response to humanitarian, climate, and community crises worldwide. The organization’s cofounder and board chairman, Rob Wilder, accepted the award on behalf of the organization. The Catalyst Award was established in memory of Vartan Gregorian,12th president of Carnegie Corporation of New York and cofounder the Carnegie Medal of Philanthropy, who believed in the transformative power of human kindness.

The names of the five honorees were announced on August 3, 2022. At the private medal ceremony, members of the class of 2022 were presented with a citation celebrating their philanthropic accomplishments. Each honoree was also introduced with a video demonstrating the impact of their giving as told by individuals and organizations that have benefited from their generosity. To date, more than 65 philanthropists have been honored with the medal.

Each medalist received a bust of Andrew Carnegie — an original work of art cast in bronze and created especially for the award — and a bronze medal. The recipient of the Carnegie Catalyst Award received a custom crystal sculpture.

The master of ceremonies for the private event was Judy Woodruff, anchor and managing editor of PBS NewsHour and a longstanding member of Carnegie Corporation of New York’s board of trustees. In tribute to Andrew Carnegie’s heritage as a Scottish immigrant, a bagpiper playing “Scotland the Brave” led the procession of medalists into the ceremony. The Cathedral Choir of the Abyssinian Baptist Church brought the celebration to a close by performing two songs, including “Light of a Clear Blue Morning,” which was written and originally performed by 2022 medalist Dolly Parton.

View and download videos and images from the ceremony in the media toolkit.