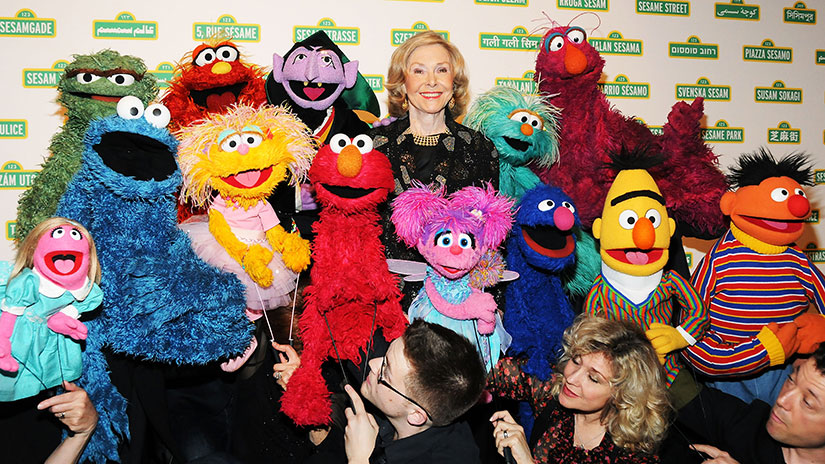 The beginning of the iconic children’s program Sesame Street can be traced to an apartment in Manhattan’s Gramercy Park.

It was 1966 when Joan Ganz Cooney, who worked in public television, hosted a small dinner party at her place. Her boss, Lewis Freedman, was there, as was Lloyd Morrisett, an executive at the Carnegie Corporation of New York. Freedman started talking about the potential in using television to help educate children.

“Something clicked in Lloyd’s mind because Carnegie was financing research in educational development of children, how they learn,” Ganz Cooney said in a 1998 interview for the Archive of American Television. “And he and his wife, after 10 years of marriage, had two little kids and he had noticed that there was nothing really on for them. He had gotten up one morning and found them watching test patterns, waiting for something to come on. So it all sort of came together in his mind – why not do something educational, good for children, that will help them cognitively?”

In the early days of broadcasting, this was a novel concept. Days later, an exploratory meeting was held at Carnegie. Soon after that, Ganz Cooney was traveling throughout the United States and Canada, researching the use of television for preschool education for what turned out to be a groundbreaking report.

On Nov. 10, 1969, Sesame Street premiered, with the distinguished actor James Earl Jones appearing as the first celebrity guest. For the first time, educational goals and a curriculum were used to shape content, and child psychologists advised on the impact storylines would have. As author Malcolm Gladwell has said, “Sesame Street was built around a single, breakthrough insight: that if you can hold the attention of children, you can educate them”.

“The reception was so incredible,” Ganz Cooney said in the archived interview. “The press adored us, the parents adored us. Nothing like it had ever been on the air, and there has been very few television programs – and maybe it’s the only one in history – that got this kind of immense reaction.”

Nearly half a century later, Sesame Street remains a staple of Public Broadcasting Service (PBS), although new episodes now appear on HBO first. Big Bird, the Cookie Monster, Bert and Ernie, Elmo and the other Muppets are among the most cherished and popular faces of children’s programming.

It remains groundbreaking. It has addressed real-life disasters such as the September 11 terrorist attacks and Hurricane Katrina. In April 2017, Sesame Street introduced Julia, a new Muppet who has autism, performed by Stacey Gordon, who has a son on the autistic spectrum.

“Sesame Street literally would not be here were it not for the bold vision and audacious philanthropy of the Carnegie Corporation,” says Sherrie Westin, executive vice president of global impact and philanthropy at the Sesame Workshop, the non-profit organization behind the show and other educational initiatives. “That investment proved to be transformational for children’s television, as we know, and millions of children have benefited.”

It is as American as apple pie, and holds a special place in the heart of anyone who has grown up in the US. Indeed, surveys show that 95 per cent of preschoolers have watched it. But extraordinarily, Sesame Street is also now one of America’s great exports. Its effect on children worldwide could not have been foreseen.

The workshop reaches 156 million children in 150 countries. Study after study has pointed out Sesame Street’s success. A 2013 report found that children who watch one of its international versions gain an average of nearly twelve percentile points on learning outcomes. In Afghanistan, children who watch it test 29 per cent higher on gender equity attitudes. In Bangladesh, 49 percent more children use soap for hand washing after participating in a Sesame Workshop program. And a new Harvard Business Review article lists Sesame Street among the past century’s fifteen examples of social movements that defied odds and achieved life-changing results.

Public TV was the only place to watch all 250 hours of Watergate testimony. And when NPR started broadcasting in April 1971, it showed live coverage of Senate deliberations on the Vietnam War.

Recent threats to future funding appear to have been averted. The new federal government originally proposed eliminating all federal money for public broadcasting. But a House committee recently appropriated a budget for the Corporation for Public Broadcasting (CPB), which supports nearly 1,500 public television and radio stations nationwide.

“As we mark the 50th anniversary of the passage of the Public Broadcasting Act, this uniquely American public-private partnership continues to keep its promise—to provide high-quality, trusted content that educates, inspires, informs and enriches in ways that benefit our civil society,” Patricia Harrison, CPB’s president and CEO, said in a statement. “Through the nearly 1,500 locally owned and operated public radio and television stations across the country, public media reaches 99 percent of the American people from big cities to small towns and rural communities. At approximately $1.35 per citizen per year it is one of America’s best infrastructure investments—paying huge dividends in education, public safety and civic leadership for millions of Americans and their families.”

Westin says it is vital to stress that the benefits of children’s public television are greatest for those who have the least. And as Sesame Street gears up for its 50th birthday celebration in 2019, it is a good time to inform people about the breadth of its work.

“People love our broadcast, but often don’t realize we’re in 150 countries or that we’re in developing countries like Bangladesh, Afghanistan and in South Africa, making a difference,” she says. “And the 50th anniversary gives us the opportunity to celebrate all the work we’ve done addressing the challenges of the most vulnerable children around the world.”

So that 1960s dinner party in Gramercy Park had a huge and lasting impact. Whether it is in helping tackle HIV/AIDS in South Africa, progressing girls’ education in Afghanistan or raising awareness of autism in the United States, you can count on Big Bird and friends to be there.