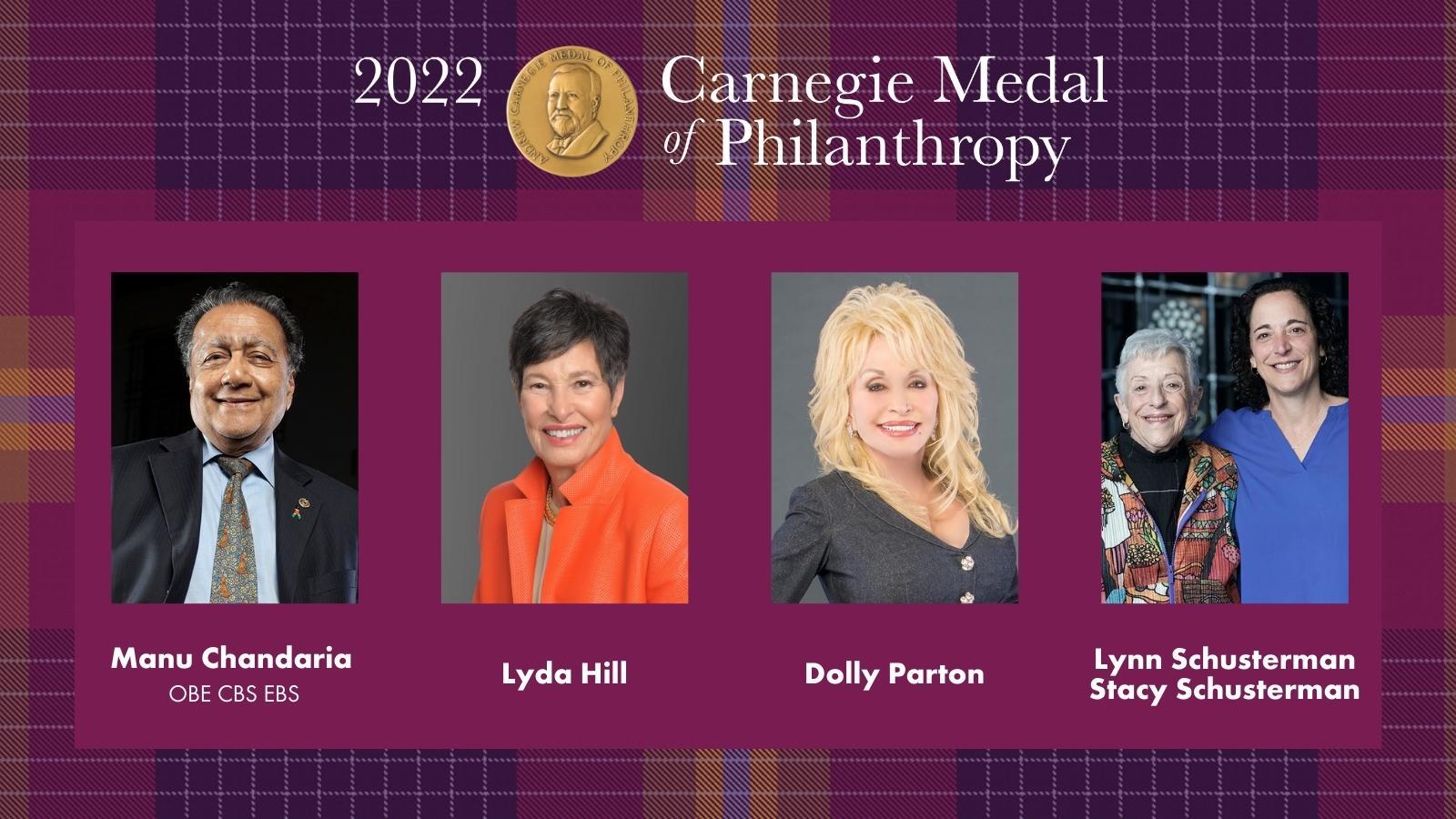 The Carnegie family of institutions salutes five individuals
who are forces for positive change:

With a special presentation of the Carnegie Catalyst Award to:

August 3, 2022 (New York) – The international family of Carnegie institutions named five distinguished philanthropists as recipients of the 2022 Carnegie Medal of Philanthropy today in recognition of their extraordinary contributions toward addressing the challenges facing our world. The goal of the medal is to inspire a culture of giving by honoring innovative philanthropists and by elevating the importance and relevance of philanthropic contributions to our society.

The Carnegie institutions also announced a special Carnegie Catalyst Award, created to celebrate the transformative power of human kindness. It honors a nonprofit organization that has been exceptionally effective in catalyzing people’s desire to help one another during times of crisis.

At a time when global giving stands at some $485 billion annually, the 2022 honorees have been leading the field of philanthropy by example. The medal seeks to honor their vision and generosity and to encourage others to join them in making the world a better place for all. This year’s honorees have had a significant and lasting impact on many of today’s most pressing issues through their support of medical research in cancer and pediatric care; the advancement of women in STEM fields; the reduction of racial, gender, and economic inequities; the furtherance of early childhood literacy and K–12 education; and the improvement of the quality of life in African countries.

Among the most prestigious honors in the field, the Carnegie Medal of Philanthropy has been awarded for more than two decades, since its establishment in 2001, by the family of Carnegie institutions — more than 20 organizations in the United States and Europe founded by the philanthropist Andrew Carnegie. To date, more than 65 philanthropists have been honored with the medal.

The 2022 Carnegie Medal of Philanthropy Honorees:

For advancing opportunity and addressing critical needs in Africa through investments in health-care infrastructure, secondary and higher education, poverty relief, and environmentalism.

For investments in the life sciences, including cancer and mental health research and treatment; conservation; supporting women in STEM fields and inspiring girls to be interested in STEM careers; and empowering community-based nonprofits to maximize impact.

For alleviating poverty, strengthening early childhood education through the distribution of free books worldwide, increasing college access, and advancing medical research, including on pediatric infectious diseases and the development of a COVID-19 vaccine.

For advancing racial, gender, and economic equity through investments in areas such as K–12 education, democracy and voting rights, gender and reproductive equity, and criminal justice; and supporting Jewish communities and a secure, inclusive Israel.

Founded by chef José Andrés in 2010, the organization is recognized for mobilizing volunteers to provide meals in communities affected by humanitarian and natural disasters. World Central Kitchen has served more than 200 million meals in countries around the world, and the organization continues to build one of the largest food relief organizations in Ukraine during the current conflict.

The new Carnegie Catalyst Award was created in honor of the cofounder of the Carnegie Medal of Philanthropy, Vartan Gregorian, who died in April 2021. He served for 24 years as the beloved president of Carnegie Corporation of New York, leading the Carnegie Medal of Philanthropy in honoring 10 classes of medalists. Gregorian himself was a catalyst who believed in the transformational power of human kindness — and who led by example.

“The 2022 Carnegie Medal of Philanthropy honorees have a wide range of important priorities, yet they share a common goal through their determination to have impact and create positive change,” said Governor Thomas H. Kean, chairman of Carnegie Corporation of New York’s board of trustees and former governor of New Jersey. “This year, the Carnegie Catalyst Award will expand on their example by celebrating the ability of an organization to inspire and mobilize others. The recipient, World Central Kitchen, is an outstanding model of how humankind can respond in times of dire need by activating the inherent goodness in others — an ideal that was embodied through the life and work of Vartan Gregorian.”

“Today we acknowledge the significant contributions of five philanthropists who are energizing the field of philanthropy through their forward-looking goals for the world, including in Africa through the work of Manu Chandaria,” said Sarah Davidson, chief executive of Carnegie UK and a member of the medal selection committee. “This is also an opportunity to celebrate the giving by women who continue to strengthen the sector through their fresh perspectives and long-term commitments. Lyda Hill, Dolly Parton, Lynn Schusterman, and Stacy Schusterman are leading the way in motivating the next generation of women philanthropists.”

“Andrew Carnegie sought to do what he called ‘real and permanent good in this world’ through his giving, and today, we acknowledge the 2022 Carnegie Medal of Philanthropy honorees for upholding this ideal through their philanthropy,” said William Thomson CBE, honorary chair of the medal selection committee and Carnegie’s great-grandson. “For most of Carnegie’s life, he was completely devoted to his ‘duty of administering surplus wealth for the good of the people’ while inspiring others to do the same. This virtuous cycle is the true meaning of the Carnegie Medal of Philanthropy.”

Every two years, medalists are nominated by the family of Carnegie institutions — and a selection committee representing seven of those institutions makes the final selection. The recipients of the 2022 Carnegie Medal of Philanthropy will be honored on Thursday, October 13, 2022, during a private ceremony in New York City. The event will be hosted by Carnegie Corporation of New York, and Judy Woodruff, anchor and managing editor of the PBS NewsHour, will serve as master of ceremonies.

Past recipients of the Carnegie Medal of Philanthropy:

To learn more about the Carnegie Medal of Philanthropy (including current and past honorees), the family of Carnegie institutions, and Andrew Carnegie, please visit MedalofPhilanthropy.org and follow new developments on social media @CarnegieMedal (Twitter), @MedalofPhilanthropy (Facebook), and #CMoP.