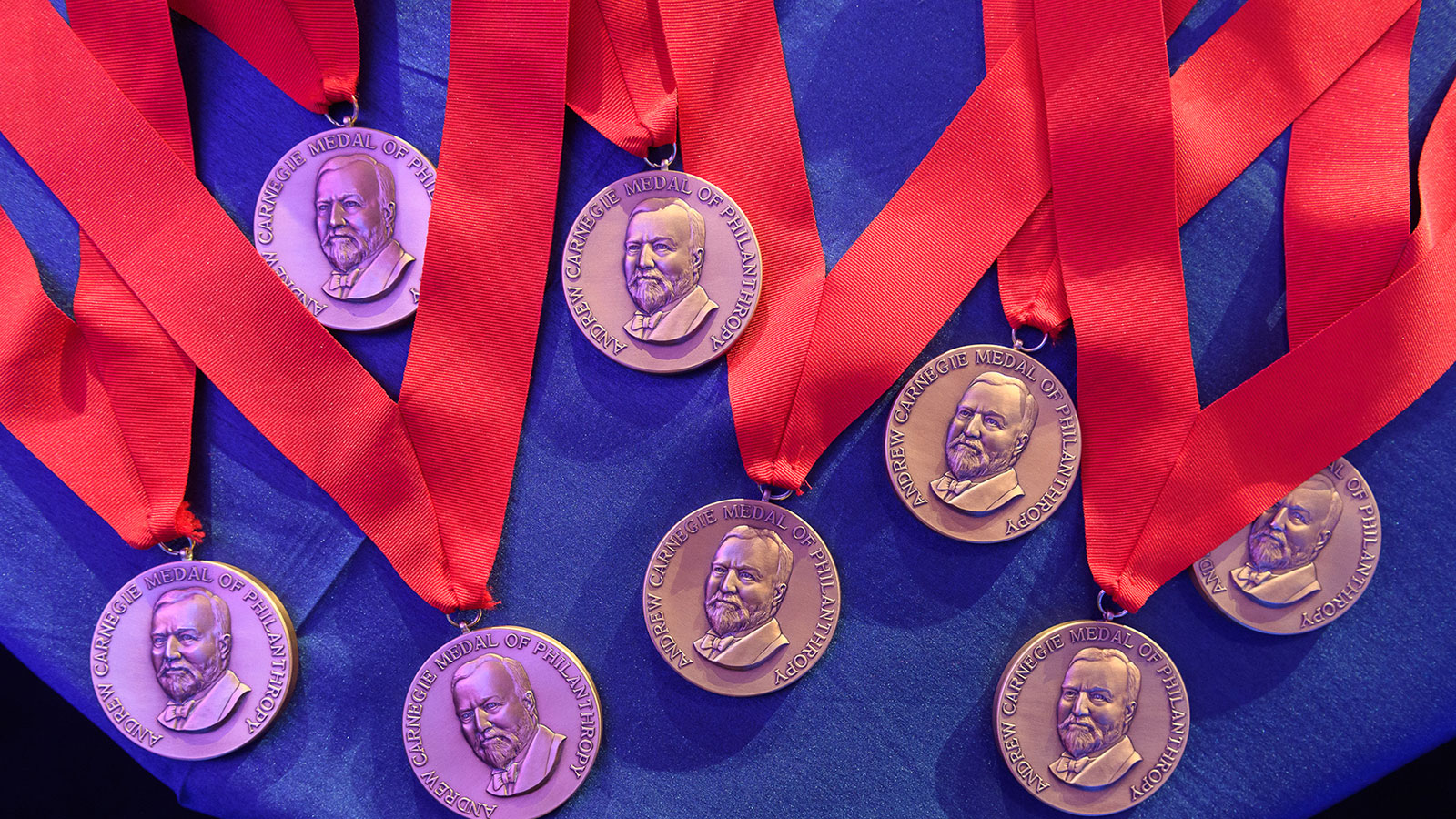 On the centenary of the death of Andrew Carnegie, medalists advance his enduring vision for a better world

August 12, 2019 (Dunfermline, Scotland, United Kingdom) – The international family of Carnegie institutions named the 10th class of Carnegie Medal of Philanthropy recipients on Monday as part of a series of events marking the 100th anniversary of the death of Andrew Carnegie. The announcement was made at the Andrew Carnegie Birthplace Museum in his ancestral home of Dunfermline, Scotland. Carnegie remains one of the most influential philanthropists in history, having established more than 20 institutions which continue their founder’s mission to achieve “real and permanent good in this world.”

The nine medalists embody the spirit of giving set forth by Andrew Carnegie, each having had significant and lasting impact on a particular field, nation, or the international community. Among the most charitable and visionary philanthropists in the world, the medalists’ generosity has influenced a wide range of issues, including education, the environment, scientific research, arts and culture, healthcare, and technology.

Anne G. Earhart is a longtime philanthropist who champions environmental causes through her foundation and her individual support of political candidates who prioritize environmental protection and climate change. Her commitment to these issues reflects an understanding of the existential importance of protecting our natural resources and global biodiversity, but it is also personal — she grew up loving the outdoors and wants to ensure that nature is preserved for future generations to enjoy. In 1986 Ms. Earhart founded Marisla Foundation, which supports human services organizations in addition to promoting sustainable ecosystem management and seeking solutions to threats to human and environmental health caused by toxic chemicals. Guided by Ms. Earhart’s philosophy of philanthropy, Marisla has remained a consistent funder to over 600 nonprofit organizations. In addition, Ms. Earhart and Marisla have been leaders in marine conservation, working strategically to mitigate habitat destruction, pollution, and overfishing. Marisla collaborated with several major foundations to create Oceana, the first nonprofit focusing solely on protecting and restoring the world’s oceans, which has helped to preserve 4.5 million square miles of oceans. Marisla has also been a founding partner in several other collaborative philanthropic efforts, including Oceans 5, Plastic Solutions Fund, Partners for a New Economy, and the Health and Environmental Funders Network.

Renowned filmmaker George Lucas believes that education is the “foundation of our democracy and a stepping stone for youth to reach their full potential.” His wife, Mellody Hobson, experienced the life-changing power of education firsthand — growing up in a single-parent household in Chicago, earning admission to Princeton University, and rising to become the co-CEO and president of Ariel Investments. The couple’s philanthropic investments reflect that shared understanding. In 1991 Mr. Lucas founded the George Lucas Educational Foundation, which aims to transform K–12 education through project-based learning, social and emotional learning, comprehensive assessment, teacher development, integrated studies, and technology integration. Ms. Hobson is chair of After School Matters, a nonprofit that provides high-quality, out-of-school-time programs that have propelled low-income Chicago teens to achieve their full potential: 90 percent of students in its Freshmen On-Track program graduate high school — 11 points higher than their Illinois peers. Together, through the George Lucas Family Foundation, Ms. Hobson and Mr. Lucas also support a range of organizations that are making the world safer, healthier, and more vibrant, including childhood development and mentorship programs, medical institutions, gun control and environmental organizations, and museums and cultural institutions.

Henry Kravis cofounded the global investment firm Kohlberg Kravis Roberts & Co., where he remains co-CEO. Marie-Josée Kravis is a prominent economist who serves as vice chair and senior fellow at the Hudson Institute, a not-for-profit policy and research center. Together they are among America’s most active philanthropists, supporting education, community development, and arts, culture, and science institutions. The Kravises made landmark gifts to establish the cutting-edge Center for Molecular Oncology at Memorial Sloan Kettering Cancer Center and a transformational research center at Rockefeller University, where Mr. Kravis has served as vice chair. Mrs. Kravis is chair of the Sloan Kettering Institute. The Kravises take a hands-on approach to giving, involving themselves closely with the institutions they support. Mrs. Kravis served for 14 years as president of the Museum of Modern Art (MoMA), where the couple has provided financial support as well as donating major works of art. Mr. Kravis currently serves as chairman of Sponsors for Educational Opportunity (SEO), which has a remarkable track record of helping young people from underserved communities get to and through college: 100 percent of participants earn admission to college and 90 percent graduate. Among other gifts, the Kravises have created the Kravis Leadership Institute at Claremont McKenna College in California, as well as a composer-in-residence program at the New York Philharmonic. One of the largest awards in contemporary music, the Marie-Josée Kravis Prize for New Music enables talented composers from around the world to create and share their work.

As a successful businessman, philanthropist, and social entrepreneur, Morton Mandel cofounded Premier Industrial Corporation and Parkwood LLC with his two brothers, who later joined him to cofound the Jack, Joseph and Morton Mandel Foundation. The foundation’s mission is to contribute to the flourishing of the United States and Israel as just, inclusive, compassionate, and democratic societies and to improve the quality of life in both countries. The foundation achieves that mission by funding education and leadership programs in its own institutions and at selected universities and nonprofits. Throughout his career Mr. Mandel has made it a priority to “invest in people with the values, ability, and passion to change the world.” By developing the next generation of innovators, creators, and achievers, the foundation is helping to ensure that — as the world changes — enlightened, informed leaders will be ready to meet its challenges and seize its opportunities.

As founder, chairman, and CEO of Vista Equity Partners, Robert F. Smith oversees a portfolio of more than 60 software companies and over $50 billion of cumulative capital commitments, but he believes that the true measure of one’s success is “how much we contribute to the success of those around us.” Mr. Smith emphasized that point in his 2019 commencement address at Morehouse College, surprising students by announcing a grant to eliminate student loan debt for the entire class — urging graduates to “pay it forward” by going on to become leaders in their communities who create opportunities for others. While that life-changing gift earned worldwide attention, it is just one example of Mr. Smith’s philanthropy. Since 2016 he has served as chairman of Carnegie Hall, where he champions artistic excellence and access, causes he also supports through his commitment to expanding music education programs for K–12 students. Fund II Foundation, of which Mr. Smith serves as president and founding director, invests in a wide range of causes that create on-ramps of opportunity for underrepresented minorities preparing to enter the workforce, including launching the InternX platform, which matches African American college sophomores with paid internships. The foundation advances health equity by scaling proven strategies to help African American women beat breast cancer and by supporting prostate cancer treatment access for veterans. Other priorities include protecting the environment and the national parks, and helping to safeguard human rights, including the provision of safe homes for child victims of sex slavery. Mr. Smith is also a longtime leader in efforts to preserve and share stories of the African American experience. In his individual capacity, he provided the largest private donation to the National Museum of African American History and Culture in Washington, D.C.

Leonard Tow is the founder and chairman of The Tow Foundation and CEO of New Century Holdings, LLC. Dr. Tow found success as a pioneer in the cable television industry, establishing and leading several corporations, including Century Communications, which was the nation’s fifth largest cable television company, serving nearly 2 million homes, at the time of its sale in 1999. In 1988 Dr. Tow and his wife, Claire, founded The Tow Foundation to continue their legacy through its philanthropic giving. The foundation’s mission is to drive positive change and improve the quality of life for society’s most vulnerable people. Its grantmaking focuses on opportunities for breakthroughs, innovative programs, and system reform within the fields of juvenile and criminal justice, medicine, higher education, and culture. Higher education has played an essential role in Dr. Tow’s life. He earned a bachelor’s degree at Brooklyn College, where he met his wife, and a master’s degree and PhD at Columbia University. He gave back to the higher education system as a professor at Columbia University’s Graduate School of Business, at Brooklyn College and Hunter College of the City University of New York, and at New York University’s School of Business.

Scottish businessman Sir Ian Wood KT GBE rose to prominence as founder, chief executive, and chair of Wood Group, a FTSE 100 company when he retired in 2012. In 2007 he founded The Wood Foundation, which focuses its philanthropic investments and resources on efforts to reduce inequity and increase opportunities in his home country and in East Africa. In Rwanda and Tanzania, the foundation is transforming livelihoods and regional economies through venture philanthropy in the tea industry. Working with 70,000 smallholder tea farmers on 20,000 hectares of land, the foundation is providing long-term credit, developing farmers’ essential agronomic skills through field schools which train 5,000 farmers each year, and creating the infrastructure and markets for their products to ensure a sustainable industry. In Scotland, The Wood Foundation is committed to economic and educational development. Its investments are focused on school-based interventions, as well as funding efforts to reduce childhood poverty. Programs include the Youth and Philanthropy Initiative, which is cultivating the next generation of active citizens by giving more than 35,000 young people each year a hands-on role in channeling grants to charities in their own communities. The Wood Foundation is also responsible for founding Scotland’s first private sector–led economic development body, Opportunity North East, which seeks to spur an economic renaissance in Aberdeen City and Shire. What unites the foundation’s various initiatives is a focus on investing in people, empowering them with the education, training, and resources they need to help themselves achieve lasting progress.

“My great-grandfather’s most enduring legacy is his belief that mankind could always go onwards and upwards to achieve greater things, greater nobility, to benefit humanity,” said William Thomson CBE, honorary chair of the Carnegie Medal of Philanthropy selection committee. “It’s our responsibility to plant the seeds today that will grow for the betterment of society well into the future. As Andrew Carnegie said, ‘To try to make the world in some way better than you found it is to have a noble motive in life.’”

“Andrew Carnegie, our founder, believed that ‘the man who dies thus rich dies disgraced,’” said Vartan Gregorian, president of Carnegie Corporation of New York and chairman of the selection committee. “He had a revolutionary vision of giving away his fortune, not as charity, but through investments in people that have the potential to achieve lasting change. As we commemorate the centenary of his death, Carnegie’s legacy can be seen not only through the impact of his own giving, but also in the new generation of philanthropists who embody and carry on his philanthropic vision.”

Established in 2001, the Carnegie Medal of Philanthropy is awarded every two years. The 22 Carnegie institutions in the U.S. and Europe nominate candidates, and a selection committee representing seven of those institutions choose the medalists.

The recipients of the 2019 Carnegie Medal of Philanthropy will be honored on Wednesday, October 16, 2019, at The New York Public Library during an invitation-only ceremony. The event will be hosted by Carnegie Corporation of New York, and Judy Woodruff, anchor and managing editor of the PBS NewsHour, will serve as master of ceremonies.

Past recipients of the Carnegie Medal of Philanthropy:

To learn more about the Carnegie Medal of Philanthropy (including current and past honorees), the Carnegie family of institutions, and our founder Andrew Carnegie, please visit our website at MedalofPhilanthropy.org, and follow us on Twitter @CarnegieMedal #CMoP. For more information, contact Celeste Ford, cfc@carnegie.org, 646.772.7917 in New York, New York.