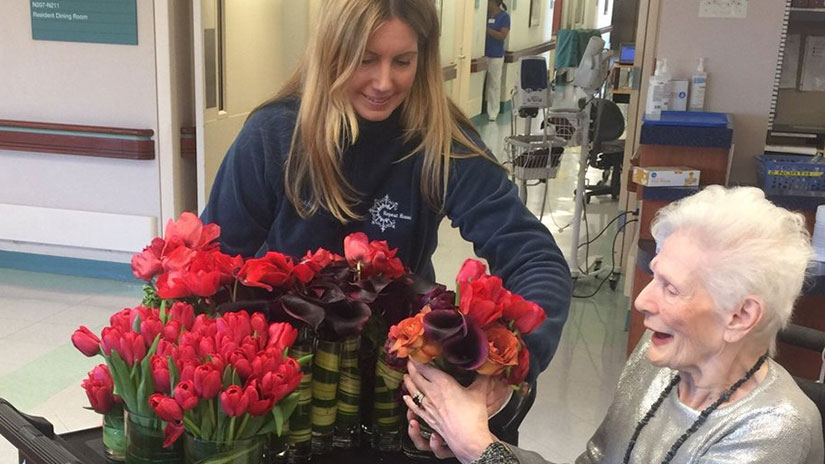 While working in the wedding and event design business, Jennifer Grove often saw expensive flower arrangements get tossed into the garbage after being on display for just a few hours. She started collecting these flowers and handing them out to friends and neighbors. This always brought smiles, but it did not solve the problem that, at the end of the day, most pricey — but still beautiful — bouquets are simply thrown out.

In 2014 Grove founded Repeat Roses, which redistributes flower displays from weddings, galas, and other events to places such as hospices, cancer treatment centers, and homeless shelters. Afterward the reused flowers are collected and composted, helping reduce landfill waste and greenhouse gas emissions.

“For me, as a social entrepreneur, my wish is that this service will actually be a catalyst to inspire people to do other good things,” Grove says. “Maybe they’ll say: I can do something else to make a difference in someone else’s world.”

A growing number of entrepreneurs are combining their businesses with social good initiatives, whether that means protecting the environment, helping more students go to college, or making healthy food more accessible. By incorporating a social mission into their business models, these entrepreneurs are finding ways to give back — and by their example they are encouraging their customers and employees to do the same. Nonprofits, foundations, and investors are realizing the power of social entrepreneurs, and are helping to propel their success.

Grove says that when she works with, for example, a couple planning their wedding, she hopes that reusing their wedding flowers will be the first of many such charitable actions to come out of the marriage. And happily, some of the organizations Repeat Roses has worked with have already been inspired to give back; in one case, a shelter for homeless women told her they are determined to do more to protect the environment and are now conscientious about recycling and composting.

Another entrepreneur, Christine Moseley, started her business after becoming frustrated at seeing healthy juices priced at $13/bottle and at the same time learning that businesses discard a lot of great produce simply because it does not look perfect. Moseley founded Full Harvest, which connects farms to food and beverage companies so that growers can sell their “imperfect” (but perfectly good) produce that might otherwise have gone to waste. This lowers food production costs while reducing food waste and making more efficient use of resources like water in the production cycle.

Moseley said that for many reasons a business model made more sense than a nonprofit model, including the fact that Full Harvest is technology-based and technology is expensive. She also wanted to be able to scale up.

“I really wanted to make a big impact and help change the world,” she said. “When you look at some nonprofits — while the work is fantastic, they’re small, local efforts and they’re not fundamentally changing what we do or changing the supply chain. There are a lot of big problems out there and a lot of them can’t be solved in larger scalable ways with a not-for-profit model. So it’s about getting investors instead of grants because you can sometimes do a lot more and faster with that model.”

Grove and Moseley both worked with Project Entrepreneur, an educational program and venture competition that helps women entrepreneurs grow scalable, impactful companies. Since launching in 2015, the program has helped more than 1,800 participants.

“While Project Entrepreneur applicants are not required to have a social mission, every year a significant number among our class are mission-driven start-ups with a double bottom line,” says Jennifer Stybel, executive director of Rent the Runway Foundation, which runs the program in partnership with UBS. “This community of female founders clearly cares about giving back and bakes that into their business models from the beginning.”

Many other foundations and organizations are working to help entrepreneurs. Robin Hood, which fights poverty in New York, in 2015 acquired Blue Ridge Labs, a social impact incubator that works to help entrepreneurs and others build technology products for underserved communities. The Case Foundation is helping create a landscape with investment opportunities that have a social impact, and also works to ensure there are rigorous social benchmarks that can be measured and evaluated.

“We’ll continue to need philanthropy, donors, and capital to help build an ecosystem in which these companies can have a level playing field,” says Rehana Nathoo, the Case Foundation’s vice president of social innovation.

The Case Foundation works on impact investing, which has seen dramatic growth in recent years. Sustainable, responsible, and impact investing assets in the United States grew by 33 percent from 2014 to 2016, to $8.72 trillion. Since social entrepreneurships are in the business of doing good, they can benefit from these investments.

Christopher Gray, founder and CEO of Scholly, a mobile and web app that helps students find scholarships, says social entrepreneurships are “the new nonprofit” — and it is likely more donors, investors, and foundations will start to see their potential.

“Social entrepreneurships actually sustain themselves, so I feel like a lot of those philanthropic dollars are going to start moving and more foundations are going to start giving grants to fund social ventures over grassroots nonprofits,” says Gray, who started his business after winning $1.3 million in scholarships himself. Gray, who appeared on ABC’s Shark Tank, grew up in poverty in a single-parent household.

Moseley, of Full Harvest, says social entrepreneurs look for many ways to give back, even beyond their business.

“Social entrepreneurs are themselves usually very philanthropic people, and we like to volunteer,” she says, adding that at her business’s two-year anniversary event, they raised money for a local food bank. “We are already doing good with our business model, but because I’m fundamentally a person trying to change the world we live in, I’m always thinking of ways to do this. It’s good on good on good.”

Social entrepreneurs run businesses, but many of them also have a bold vision: to leave the world a better place than how they found it.