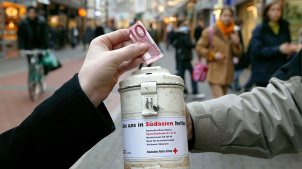 How to Give Responsibly After a Catastrophe

After Hurricane Mitch struck Honduras in 1998, some of the donations that came in included prom dresses. When Haiti was hit by a major earthquake in 2010, fertility drugs were among the items received. And back in 1994, following the genocide in Rwanda, gifts included weight loss drinks and chandeliers.

While probably well intentioned, these examples of inappropriate donations are not uncommon after disasters. In their yearning to help, people sometimes do not donate based on what is needed most and what is most efficient.

The recent disasters wreaked by hurricanes Irma, Harvey, Jose and Maria, and an earthquake in Mexico, have led to an outpouring of support from the United States and beyond. While such tragedies almost always create a need for philanthropy, experts say every act of generosity should follow certain guidelines.

The most important one to remember is that cash is usually best.

“What we always say and encourage people to do is cash donations – they are the most efficient way of assistance,” says Safiya Khalid, diaspora outreach specialist at USAID’s Center for International Disaster Information (CIDI). “Unlike material donations, cash involves no transportation cost, no shipping delays or customs. It also enables relief organizations on the ground to spend less time managing goods.”

Money also allows relief workers to buy the most urgently needed items. This is typically done locally, so it also helps boost the local economy, she says. And such purchases are usually financially smart as well. Sending bottled water overseas can be 1,000 times more expensive than producing drinkable water locally, according to CIDI.

Another important factor to consider is the long-term need for funding. Disaster-related giving reached $22.5 billion in 2014, and 73 percent of total funding targeted immediate response and relief efforts, according to the most recent report from the Foundation Center and the Center for Disaster Philanthropy. It is worth considering recurring and long-term donations, as funding after a major disaster may be needed for up to 10 years, according to the Center for Disaster Philanthropy.

Donors and funders should also consider which communities are most affected by disasters, and what can be done to prevent future ones, according to Ryan Schlegel of the National Committee for Responsive Philanthropy.

“We must be ready not just to rebuild houses and bridges, but to rebuild the power and elevate the voice of marginalized communities who were disproportionately impacted by the storms,” Schlegel wrote in a recent blog post.

Figuring out where to donate is not always easy. While American Red Cross often tops suggested lists, a 2015 investigation by NPR and ProPublica found a number of problems with the organization’s work following the Haiti earthquake. And in his book “Doing Good Better,” William MacAskill warns that generally speaking, donating to organizations that are best at fighting poverty and preventable diseases such as AIDS and malaria usually leads to greater returns than donating after disasters.

Whether you decide to donate to a national organization or a small community non-profit, here are some resources to help you give responsibly next time a disaster strikes: