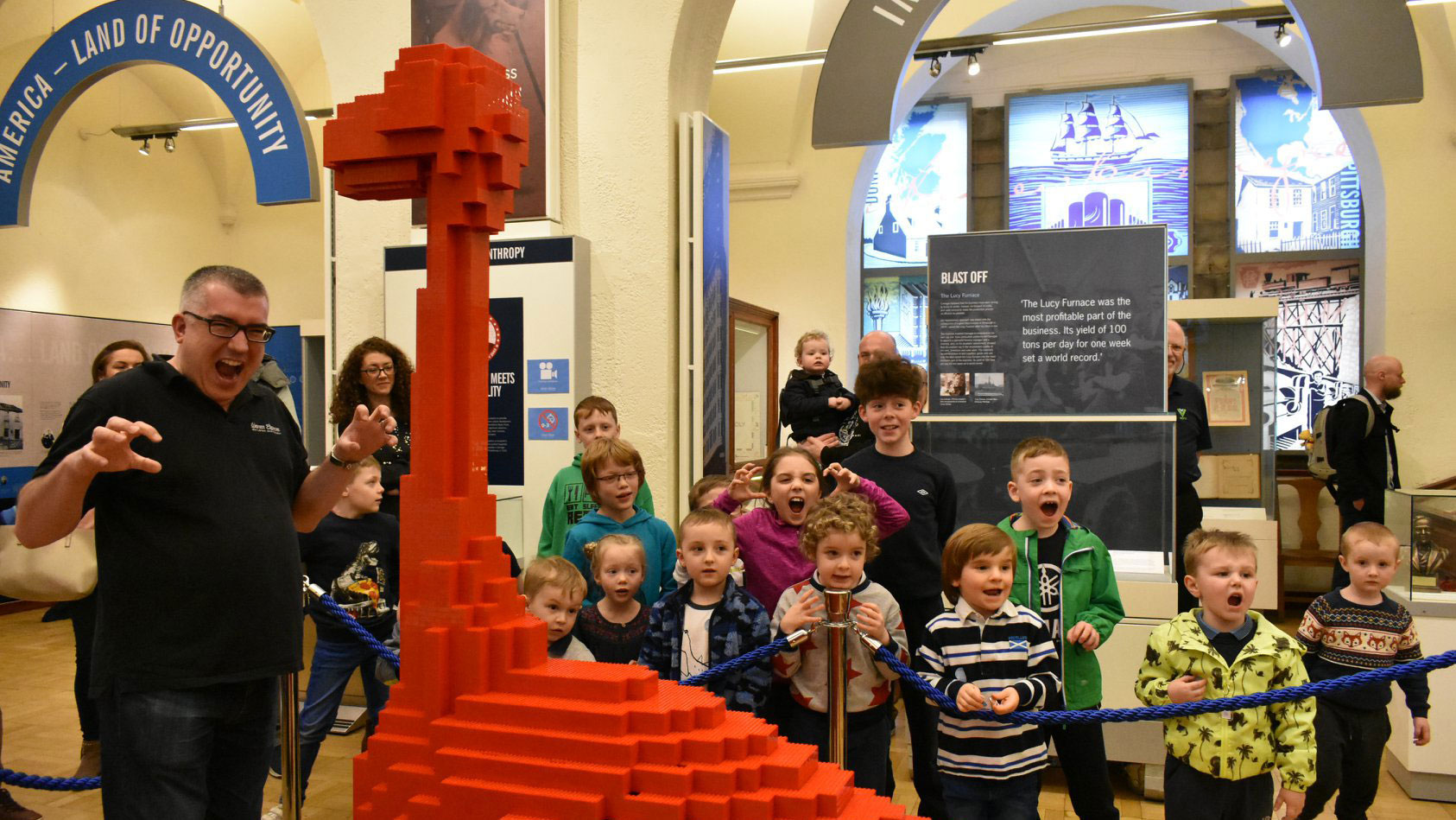 Scotland’s Dunfermline learned about dinosaurs, engineering, and collaboration when they built a dinosaur made of 35,000 Lego bricks

A six-and-a-half-foot red Lego dinosaur recently loomed large in the Andrew Carnegie Birthplace Museum in the Scottish town of Dunfermline. One might not guess that thousands of hands and minds went into its construction, but this playful interpretation of the beloved Diplodocus carnegii dinosaur represents a grand collaboration. The original Diplodocus dinosaur, fondly dubbed “Dippy” by one and all, calls the Carnegie Museum of Natural History in Pittsburgh home; a full-scale plaster replica of the original Dippy is currently touring the U.K. with great success. Meanwhile, Dunfermline went “Dippy About Dinosaurs” — thanks to Lego Dippy.

Children and other Dunfermline community members worked together with representatives from the Carnegie Dunfermline Trust and the Carnegie Hero Fund Trust, as well as with renowned Lego artist Warren Elsmore and his team, to put the dino’s 35,000 Lego bricks together, bringing the model to life for those in the area who might not be able to make it to see the traveling Dippy skeleton during its residency at Kelvingrove Art Gallery and Museum in Glasgow. Built in the collaborative spirit that was championed by Andrew Carnegie, Lego Dippy is an apt way to celebrate the philanthropist’s legacy today, during the centennial year of his death.

“The interactive build process really brought the community together, and everyone had a great time; children, staff, adult visitors, and the Police Scotland Youth Volunteers who participated,” says Nora Rundell, chief executive of the Carnegie Dunfermline & Hero Fund Trusts. “Our idea was that not everyone can get to Glasgow to see the dinosaur cast and exhibition, and this event would provide a hands-on opportunity to relate to Dippy, even if it’s in Lego form. The aim of the exhibition in Glasgow and the Lego build in the Birthplace Museum was to allow people to see a Diplodocus take shape while learning about the fascinating story of Carnegie’s use of paleontology as a vehicle for peace diplomacy.”

Opening in Glasgow in January and running there through May 6, the extremely successful Dippy on Tour exhibition showcases the full-scale replica Diplodocus skeleton from the collections of the Natural History Museum in London. The exhibition includes materials, curated by the Birthplace Museum, telling the story of how Carnegie funded the excavation of the original fossil in Wyoming in 1898 — christened Diplodocus carnegii in honor of the dig’s benefactor. This eventually led to the development of Carnegie’s celebrated “Dinosaur Diplomacy” agenda: full-scale plaster replicas of the dinosaur skeleton were commissioned a few years later and gifted to seven heads of state, including the U.K., in an attempt to promote peace among nations. The original Dippy Diplodocus skeleton draws hundreds of thousands of visitors to Pittsburgh’s Carnegie Museum of Natural History each year. The U.K.’s Dippy replica, which has been on a tour throughout the country, continues to spread Carnegie’s ideals of peace and education.

“Carnegie was committed to inspiring younger generations in education and enterprise and the aim of the build was to make engineering concepts accessible to everyone, regardless of age or ability, and to engage them in the concept and construction processes.”

In Dunfermline, the building of the Lego Dippy sculpture was one of several innovative educational programs designed by the Carnegie Dunfermline Trust and the Birthplace Museum to teach not only natural history but structural engineering as well. The program had the added benefit of encouraging collaboration and educating the public at large about Andrew Carnegie’s legacy.

“Carnegie was committed to inspiring younger generations in education and enterprise and the aim of the build was to make engineering concepts accessible to everyone, regardless of age or ability, and to engage them in the concept and construction processes,” says Rundell.

Edinburgh-based Warren Elsmore led the Lego engineers. Elsmore specializes in engineering complex Lego models that enable group participation and construction. The choice of the Dippy shape for the completed model was meant to reinforce the Carnegie connection but also to present certain construction challenges.

Founded on teamwork, Elsmore planned a build process running over three days with each of the more than 1,100 participants, whose ages ranged from four years to adult, building simple shapes that were then put together to make up the whole. Each step of the project was designed and overseen by engineers from his team, who have created a wide range of equally challenging models in museums across Europe.

The process reflected “Carnegie’s idea that education should be accessible to all and his belief that working together will help us all to achieve great things,” says Rundell. Carnegie wisely understood that by being a “shareholder” in a process, participants would value the outcome more.

“The participants loved it,” reports Rundell. “Some kids spent hours at the museum, not only building Dippy, but also building other things, looking around the museum, and participating in family workshops, including special sessions for toddlers with Duplo instead of Lego.”

The Lego build project represents a directional change for the museum. “In the past, the museum has had more of a top-down approach presenting a ready-made exhibition for visitors to see/enjoy,” says Rundell, “whereas now it is more about joining in and doing things together.”

The Dunfermline community members who helped build the Lego Dippy replica are keeping Carnegie’s legacy alive — in the arts, in culture, in science, and in education.

On display at the Birthplace Museum through April 17, Lego Dippy was accompanied by a series of themed events (running into May) designed to engage visitors of all ages and abilities and encouraging them to explore the museum’s collection. All of the museum’s educational activities are free, in line with Carnegie’s belief that everyone should have access to education regardless of their income or ability. A dinosaur egg hunt around the museum served as a scavenger hunt bringing visitors to every corner of the collection. Dinosaur-themed family craft days, Lego-building workshops, and paleontology-themed family days as well as activities for babies and children under five help engage the youngest visitors in the museum and in Carnegie’s life and work.

Carnegie believed “there’s little success where there is little laughter,” so programming has been structured accordingly, to engage in age- and ability-appropriate ways. Toddler sessions are aimed to help them improve dexterity, while school-age children learn about Carnegie and life during the Victorian era in Dunfermline. “Carnegie was an ordinary man who achieved extraordinary things, and we teach children that they can, too,” says Rundell. “Also, children learn about how life is different today than in his time. For example, hygiene was poor in Victorian Dunfermline, but things are not great now either — we have plastic pollution and other problems that need solutions.”

One particularly innovative morning session at the Birthplace Museum was geared to children with sensory issues and special needs, offering a quieter time to connect with Lego Dippy and participate in activities around the dinosaur. These types of inclusive events are a true extension of Carnegie’s mission to foster education for all. The development of programming for individuals with autism is meant to enable those who do not usually visit museums, because of too much noise, audio interaction, light, or crowds, for example, to experience the displays in a suitable environment with appropriate support.

“Our staff have undergone training and the sessions are scheduled before and after the museum is open to the general public,” says Rundell, who reports that other groups with particular support needs can also book individual sessions. “Sometimes just offering a space for these community groups is enough — they are positively surprised when the museum staff reaches out to them and offers them an opportunity to visit and join in, such as with Young Carers (these are children under 18 who must provide care for another because of family circumstances). In most cases, these groups feel nobody is interested in them in other public venues. If kids need a quiet space and to be away from other crowds — just allowing them to come in and see an exhibit before we open to general public means a lot to them.”

The Birthplace Museum Dippy exhibit was just one of the many worldwide events being held this year as part of the Forging the Future series commemorating the centennial year of Andrew Carnegie’s passing. The Dunfermline community members who helped build the Lego Dippy replica are keeping Carnegie’s legacy alive — in the arts, in culture, in science, and in education. As a matter of fact, Lego Dippy’s sojourn in Dunfermline was so successful that even after the big red dino was taken down, the Birthplace Museum hosted Bricks 4 Kidz workshops, where children continued using Legos to build models of such favorites as the Stegosaurus and the fearsome Tyrannosaurus rex. In Dunfermline, dinosaur fever rages on.