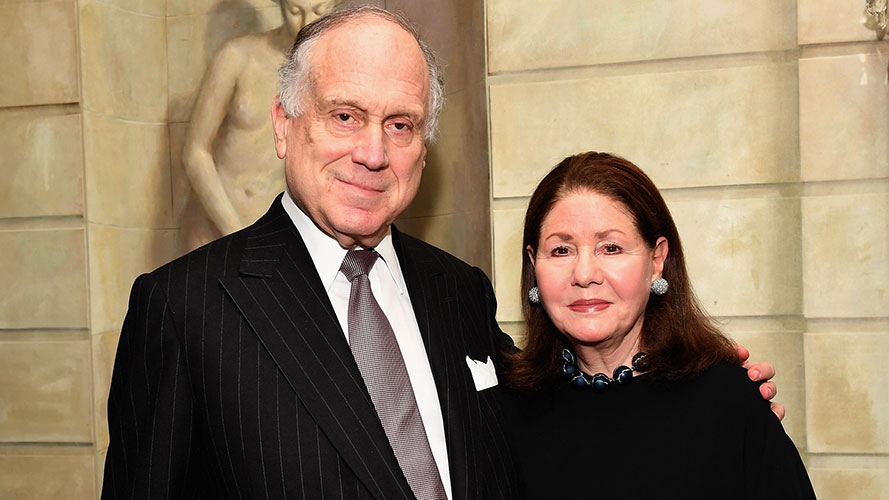 For more than four decades Jo Carole and Ronald Lauder have been among the country’s preeminent supporters of the arts and civic causes, with an impressive portfolio of worldwide philanthropic and professional accomplishments. Ronald Lauder, as founder and chairman of Clinique Laboratories, Central European Media Enterprises, and RWL Water Group, business endeavors span the globe. The art world also knows him as a leading patron and collector. He is the founder and president of the Neue Galerie, a museum dedicated to German and Austrian art and one of New York City’s most popular institutions. In his decades-long involvement with New York’s Museum of Modern Art, he served as chairman of the board for ten years and continues to offer his guidance as honorary chairman.

His philanthropy demonstrates a deep commitment to his Jewish heritage. Following his years as the U.S. Ambassador to Austria, he established the Ronald S. Lauder Foundation in Central and Eastern Europe, which reaches more than 3,000 young people each year with its message of education, empowerment, and engagement. Among other activities, the foundation provides core support for some thirty schools and kindergartens, and facilitates preservation of the Auschwitz-Birkenau site. As president of the World Jewish Congress, he travels the globe on behalf of Jewish communities from South America to Southeast Asia. He has been president of the Jewish National Fund since 1999, and has served as chairman of several key organizations serving the Jewish people, among them the Conference of Presidents of Major American Jewish Organizations and the International Public Committee of the World Jewish Restitution Organization. He also serve on the boards of other organizations too numerous to cite.

Jo Carole Lauder, too, is an outstanding supporter of the arts. She works tirelessly as chairman of the Foundation for Art and Preservation in Embassies, which works directly with the Department of State to enhance the image of the United States abroad through American art in our embassies. Her degree in fine arts has been continuously called upon in her many significant roles, including leadership of the International Council of the Museum of Modern Art as president and now president emerita. Her enduring commitment to MoMA includes service on its Contemporary Arts Council, as well as fundraising and other important committees, and she serves on the boards of other leading art institutions here and abroad. She has worked on several documentaries about significant people and places in the American arts. In addition, she devotes her time to Mount Sinai Medical Center, fundraising and serving on the board of trustees. She and her husband are major contributors to the Jo Carole and Ronald S. Lauder Newborn Intensive Care Unit and the Jo Carole and Ronald S. Lauder Center for Maternity Care.

Jo Carole and Ronald Lauder, have no doubt discovered, as Andrew Carnegie did, that “the happiness of giving happiness is far sweeter than the pleasure direct.” For discovering so many ways to give happiness to people from their city and around the world, we gratefully commend you both.