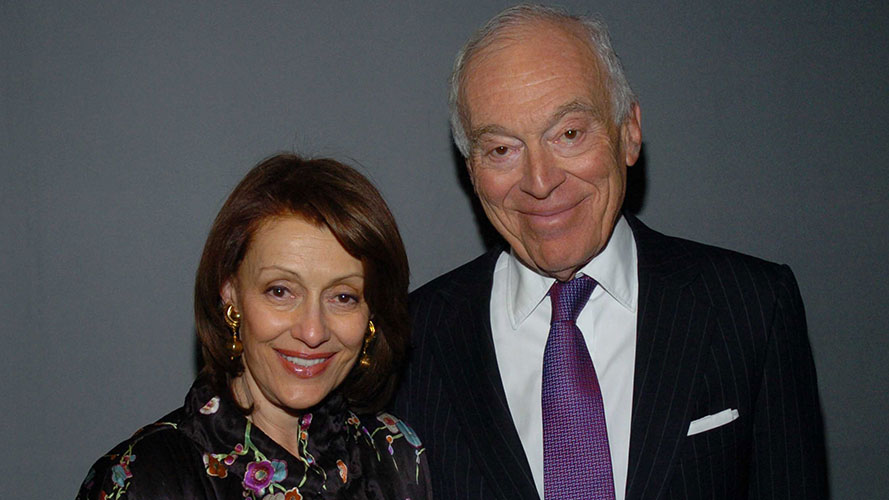 The Leonard and Evelyn Lauder Foundation

The most helpful piece of advice that I could give to anybody is to select a charity, or create a charity, that you really feel passionate about and if you do, don’t give up.

Evelyn and Leonard Lauder’s passion for improving people’s lives is legendary especially in New York City, their home. It was here in 1946 that Mr. Lauder’s mother, Estée Lauder, started the family business with four products and a belief in the possibility of beauty for all women. Later, explaining the company’s extraordinary success, she said, “I didn’t get there by wishing for it or hoping for it, but by working for it” – a remark that could have come straight from Andrew Carnegie, a renowned self-starter himself. Like his mother, Mr. Lauder gave his best to the company for more than fifty years, which has expanded so that there are now more than twenty-nine brands available in 140 countries. In addition to business acumen, perhaps his passion for beautiful art and his willingness to work tirelessly for a worthy cause are also legacies from Estée Lauder herself.

As a connoisseur of contemporary art, Leonard Lauder is Chairman Emeritus and a major benefactor of the Whitney Museum of American Art, donating millions in important works of art as well as monetary support and acting as an avid fundraiser. He is also a leader outside the art world: the Co-Founder and Chairman of the Alzheimer’s Drug Discovery Foundation, a generous donor to the Wharton School of the University of Pennsylvania, a member of the Council on Foreign Relations, a trustee of the Aspen Institute, and a member of the President’s Council of Memorial Sloan-Kettering Hospital. Together with Evelyn he gave $50 million to establish the Evelyn H. Lauder Breast Center of Memorial Sloan-Kettering Cancer Center, which offers advanced outpatient services for cancer diagnosis and breast cancer detection and treatment.

Evelyn Lauder, is a marvel. Not only is she senior corporate vice president of The Estée Lauder Companies, she is also a dedicated philanthropist, especially in the fight against breast cancer. She is the founding chairman of the Breast Cancer Research Foundation, which has raised more than $330 million and supports researchers across the United States and around the world. She famously helped invent the pink ribbon, now an iconic symbol of breast health, and oversaw the distribution of close to 115 million pink ribbons worldwide. To focus global attention on breast cancer prevention, she also spearheaded the Global Landmarks Illumination Initiative. Now, during the month of October, pink lights shine on dozens of buildings and historic landmarks, from the Taj Mahal Palace and Tower to the Empire State Building. Many women around the world are alive and healthy today because of her unwavering commitment to this fight.

A century ago, Andrew Carnegie expressed no doubt about what mattered in life, and his words hold true today: “A man’s first duty is to make a competence and be independent,” he said. “But his whole duty does not end here…. It is his duty to contribute to the general good of the community in which he lives.” Evelyn and Leonard Lauder, for countless contributions to our community and the world, we offer our sincere admiration and thanks.