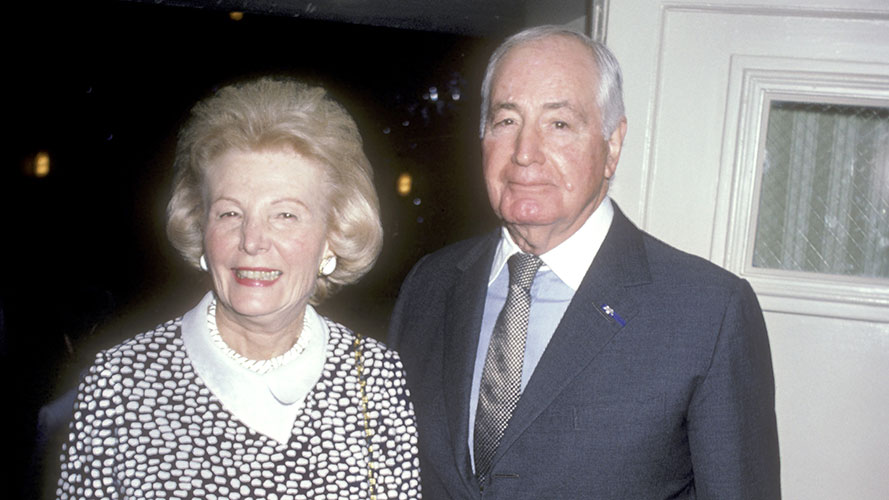 Live rich, die poor; never make the mistake of doing it the other way round.

The Annenberg Foundation embodies the vision and compassion of Walter Annenberg and his deep commitment to philanthropy and public service.

Leonore Annenberg, a committed philanthropist, dedicated civic leader, patron of the fine arts and ambassador for all that embodies the spirit and hope of America, worked side-by-side with her husband and partner of fifty years and served, with distinction, on the boards of some of this country’s most important institutions including the New York Metropolitan Museum of Art, the Philadelphia Orchestra, the University of Pennsylvania and, of course, the Annenberg Foundation.

Several years ago Mr. Annenberg exhibited his extraordinary faith in education and a belief shared by Andrew Carnegie, “that education is a ladder that can lift up anyone to the greatest heights.” By creating the Annenberg Challenge Grant, the largest single gift ever made to American public education, the $500 million program of challenge grants, which generated over a billion dollars in matching funds, was designed to energize, support and replicate successful K-12 school reform programs throughout the country and celebrated our national conviction that a democratic society has an obligation to educate all students well, especially in light of the economic realities of the new century. Like no other individual act by an American citizen, the Annenberg Challenge Grant program announced, with pride and conviction, that education was the number one priority of our country and signaled our abiding faith in a future of hope and promise for all Americans.

During her husband’s tenure as United States Ambassador to the Court of St. James, Mrs. Annenberg brought her distinctive taste, style and elegance to the royal court and, later, in Washington, D.C., served her country with the same grace and diplomacy in the capacity of Chief of Protocol, with the rank of Ambassador. She has been nationally celebrated as a great champion of the arts and recognized internationally with awards from the governments of Italy and the Netherlands. In Great Britain she created the American Friends of Covent Garden and back at home worked tirelessly on behalf of the Committee for the Preservation of the White House. Always kind, she wove together the themes of art and education, culture and public service, creating a tapestry of honor, service and vision that puts our nation and many others around the world deeply in her debt.

Walter and Leonore Annenberg: 2014 Rancho Mirage Citizens of the Year